Collections of institutional members of the HCCH

The Institute for Papyrology houses a collection of around 11,000 pieces of papyri, parchments, rag papers and ostraca from Egypt. This collection has been continually developed since the first acquisitions in 1897. It is now the second largest of its kind in Germany and was one of the first papyrus collections in the world to be completely digitized. The catalogues, which have since been made available online, are currently being converted into a new format at Heidelberg University Library under the title ‘Heidelberger Papyrussammlung - digital’ (Heidelberg Papyrus Collection - digital). Together with this collection, an extensive scientific library on papyrology has been established over the last 100 years. Core projects on papyrology are also supervised here, which makes this institute a top-class international centre for papyrological research.

Corpus of Minoan and Mycenaean Seals (Institute for Classical Archaeology)

The Corpus of Minoan and Mycenaean Seals archive contains modern impressions, photographs, drawings and other information on around 95% of the Aegean seals and seal impressions known today. The collection was compiled within the framework of the eponymous project at University of Marburg, the aim of which was to publish the entirety of Aegean seals and seal impressions in a scientific series. The collection, which is now kept in Heidelberg, serves as the core of various ongoing projects to expand the holdings. It also serves to contribute to the value of research and is an important aid for research and teaching. It is internationally unique in that it documents almost the entirety of a genre at a single location.

Collection of the Institute of Prehistory, Protohistory and Near-Eastern Archaeology 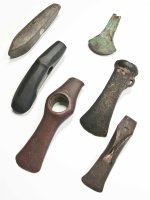 Photo Library of the Institute for European Art History

The Photo Library of the Institute for European Art History is a photographic collection on European art history from antiquity to the 20th century. It is designed as a teaching and study aid. The extensive collection contains around 75,000 photographs and consists mainly of photopositives on paper, glass plate slides and prints. It is divided into the sections Topography, Painting, Mosaics and Illumination. The main part of the collection comprises reproductions of paintings and drawings as well as topographic holdings from Italy, Germany and France. The photo library contains high-quality early examples of art historical documentary photography from the 1850s onwards, including photos from the Alinari, Giorgio Sommer, Carlo Naya and Adolphe Braun.

The beginnings of the photo library date back to the end of the 19th century. Henry Thode, the first Professor of Art History in the Department of Modern Art at the Institute for Classical Archaeology from 1896 to 1911 had a significant influence on the collection during his tenure through his purchases of photographic material on Italian art. In 1911 the Institute for Art History was founded and the collection was expanded by persons including Walter Paatz, who was Professor and Director of the Institute for Art History from 1942 to 1967. Other collections and donations also found their way into the photo library, including those of the Heidelberg goldsmith Gustav Trübner and Gustav Hartlaub, former Mannheim museum director and lecturer as well as Honorary Professor at the IEK from the winter semester 1945/46.

The SemArch - Semitisches Tonarchiv (Semitic Sound Archive) is the result of a project funded by the German Research Foundation (DFG) for the digital archiving of audio recordings of Semitic languages and dialects and their publication on the Internet. It is supported by the Department of Semitic Studies at Heidelberg University. The entirety of the retained audio recordings of Semitic languages and dialects made in numerous research projects, especially those funded by the DFG, are protected from loss by central, digital archiving at Heidelberg University and made available to all teaching staff and researchers in the field of Semitic Studies and Linguistics by publication on the Internet.

The SemArch website is currently under reconstruction and will be available again in spring 2019.

The University Archive contains a wealth of information about the history of Heidelberg University. Pictures, seals, medals and museum objects are a visual means of snatching the past from oblivion. Leaflets, placards and newspapers bring contemporary history to life. Its extensive holdings - including the classical archives - form an important part of the university's tradition. The archive is often used by researchers for exhibitions and publications.

The archive not only preserves the old holdings, which date back to the 13th century; it also continuously takes selected documents that are no longer needed by the university departments and institutes for current tasks in administration, research and teaching that still have lasting value for the ‘memory of the university’.

The Institute for Byzantine Archaeology and Art History is home to a collection of Nubian ceramics. Students of the institute discovered the significance of this small but exquisite collection and names like Kulb, Sunnarti, Turmukki and Tangur during an exercise in the winter semester 2010/11. The trail quickly led to the Heidelberg New Testament researcher Erich Dinkler (1909-1981), a Christian archaeologist who was involved in the emergency excavations and surveys in the Nile Valley in Sudan from 1967 to 1969. UNESCO had called for this evacuation by 1964 at the latest, when the start of the flooding of the Aswan Dam meant that it was likely that the old cultural landscape on the upper Nile River would be irretrievably destroyed. This resulted in the spectacular translocation of the temples of Abu Simbel. For a large number of the monuments, however, such a 'rescue' was out of the question. The Nubians were most affected by the flooding: their historical settlements were abandoned. The churches of Faras and Old Dongola are familiar to the some of the general public for their medieval murals. Kulb, Sunnarti, Turmukki and Tangur, on the other hand, which Dinkler had chosen for his investigations, had no such surprises to offer. However, they are remarkable for the diversity of Nubian settlements and remind us of an ancient Christian culture whose origins date back to the missionary period of the 6th century.

The archaeological finds made during Heidelberg University's Nubian project are a testament to the Christian history of the Mid-Nile, which has lasted for about a thousand years and which is now largely unknown even among experts.

The Department of Islamic Studies of the Department of Languages and Cultures of the Near East is currently in charge of a total of four collections: the Manuscripts from Alevi Family Archives Research Post, the Ethnographic Films and Photographs on Alevism Collection, the Ottoman Prints up to 1928 Collection and the Middle Eastern Press Collection, which includes the Collection of Newspapers of the Province of Sivas (the Unbehaun Collection).

The Manuscripts from Alevi Family Archives Research Post is based on Subproject C7 (Ritual Transfer among Marginalized Religious Groups of the Near East) within the framework of Collaborative Research Center 619 (Ritual Dynamics). The core of the collection is a loan of the Alevi Şah İbrahim Veli Ocağı (Malatya, Turkey), which comprises around 30 manuscripts and 20 historical prints (the private archive of an Alevi Dede family). These are individual records which, for the first time, fix orally transmitted content in writing and thus do not originate from a direct written template. There are also copies of previously unknown religious Alevi texts as well as copies of well-known Divan works and religious treatises. The research post serves as a contact point for Alevi families with manuscripts and documents.

The Ethnographische Filme und Fotographien zum Alevitentum (Ethnographic Films and Photographs of Alevism) Collection is also a product of the aforementioned research project. With it, the department has an extensive collection of video recordings of Alevi ritual performances from Turkey, Bulgaria and Germany, particularly from the first decade of the 21st century. The collection, which currently comprises 320 video recordings (approx. 200 hours) and 1070 photographs, documents the development of Alevi rituals and religious practices (Cem, Sema, sacrifices, memorial and cultural events) under the conditions of national and transnational migration and also includes comparative material from Jewish ritual traditions. There is also interview material on the oral history of Şah İbrahim Veli Ocağı from Malatya, which is also of eminent importance for the contextualisation of the holdings of the Manuscripts from Alevi Family Archives Research Post.

The Osmanische Drucke bis 1928 (Ottoman Prints up to 1928) Collection is one of the Departmental Library of Islamic Studies’ special sites. Ottoman prints from the 19th and 20th centuries are collected under the LH Signature Group and made accessible to students and teachers upon request. In addition to literary works, the collection primarily comprises political, historiographical, religious and legal literature as well as a collection of small documents (brochures, pamphlets) from the early 20th century.

The Nahöstliches Pressewesen (Middle Eastern Press) Collection was founded in the late 1990s and collects Ottoman and Turkish-language press products from the 19th and early 20th centuries with a focus on the provincial press of the Ottoman Empire. The core of the collection is comprised by an extensive donation by Professor Horst Unbehaun (Nuremberg), which includes practically all periodicals printed in the province of Sivas from the 19th century to around 1940. The collection also contains numerous microfilms.