Valorization and presentation of cultural heritage (in a primarily regional context)

The former castle of Wersau in Reilingen is one of the few lowland castles in the Rhein-Neckar region which are actively being investigated by archaeologists. There is nothing left above ground of this castle, which survived from its founding in the early High Middle Ages up to the 18th century. It served the Electors of the Rhine as a toll castle, a hunting lodge and a winery. Even after the destruction of the castle, the site was continuously occupied up to the end of the 20th century, and was used as a mill, a farm and a residence. It thus looks back on a history covering 800 years.

Count Palatine Ruprecht I chose to receive the founding charter of the University of Heidelberg in Burg Wersau in 1386. This shows that it was a place of special importance in the High Middle Ages. The archaeological remains are thus an excellent starting point for throwing new light on the history of the Electoral Palatinate and the role of the almost forgotten lowland castles in the Rhine valley.

With the aid of dedicated volunteeers, and in cooperation with the municipality of Reilingen, the HCCH is conducting research at the site of the former Burg Wersau with the aim of setting up a regional centre for archaeology and local history. The site will be made accessible to the general public with the aid of a tourism development plan.

The German television channel SWR paid a visit to the project and published a short report on it, which you can find here. The participatory approach of the project is also the focus of a documentary entitled "Archaeology für Alle - Partizipative Wissenschaft auf der Burg Wersau"

From its foundation in the early 8th century until secularization, Schuttern Abbey in Ortenau was one of the southwest Germany’s most important monastic centres. It experienced its heyday in the 9th century: it was during this time that it was regarded as one of the most important monastic sites in the Carolingian Empire and the famous ‘Schutterner Evangeliar', a gospel book, was created in its scriptorium. Excavations under the baroque church in the 1970s revealed the remains of three earlier church buildings and in particular an almost unique figurative mosaic for countries north of the Alps, probably from the 11th century. 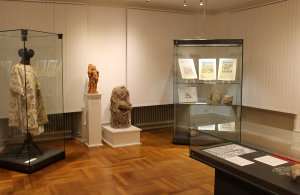 The HCCH has been working on a multi-stage concept for the exploration and valorization of this site, which is little known despite its historical and cultural importance, in cooperation with the municipality of Friesenheim and the Historischer Verein Schuttern 603 e. V. (a local history organization) since 2016. The first step was to completely redesign the abbey museum, which is located on the site of the former abbey. The new museum opened on February 22nd 2019. Students therefor developed content concepts that were implemented as part of an interdisciplinary course. 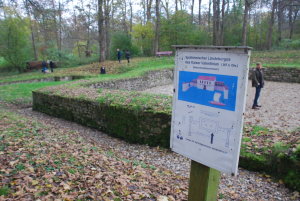 The Zullestein is not far from the famous nuclear power plant in Biblis, in the middle of the Rheinauenwald, a protected forest. The ruins were uncovered during the construction of the power plant and are the foundations of Burg Stein, a castle that was destroyed in the 17th century. The castle's history goes back a long way: in the 4th century, a late Roman border fortress (burgus) was built here on the left bank of the Rhine (near where the Weschnitz converges with the Rhine) and remained in use until the Early Modern era. In the early Middle Ages the Zullestein royal estate came into the possession of Lorsch Abbey, which had a Rhine port (portus) and a market here. In the Middle Ages it became an important seat of power for the region. Since 2014, a new concept has been in development to turn the Zullestein into a tourist attraction. Its remote location means that the Zullestein is currently neither a local nor a national cultural monument.

Together with the World Heritage Site of Lorsch Abbey and hessenARCHÄOLOGIE (the agency for preservation of monuments in Hesse) the HCCH is working on a new evaluation of the scientific findings. This evaluation is to be the basis for a new presentation of the monument. However, it is not only the concerns of cultural protection but also those of environmental and water protection that must be taken into account. The development of a new concept for the presentation of the site is taking place as part of seminars at Heidelberg University, including the participation of students.