In recent years, the HCCH has conceived, organized and initiated a number of exhibition projects in cooperation with various partners: 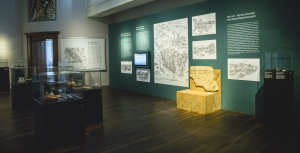 In 2016, the HCCH, together with the Historisches Museum der Pfalz in Speyer (Historical Museum of the Palatinate in Speyer) and the Generaldirektion Kulturelles Erbe des Landes Rheinland-Pfalz, Landesarchäologie, Außenstelle Speyer (General Directorate for Cultural Heritage of the State of Rhineland-Palatinate, State Archaeology, Speyer Branch Office), began developing the concept for an exhibition project in the context of several seminars, including the participation of students. The project focuses public attention on a topic that has so far received little attention: the Palatinate region at the end of antiquity.

While Late Antiquity is often regarded as a time of general decline, a look at the historical and archaeological traditions of the Palatinate in the 4th century reveals a thoroughly positive picture. Closely connected to this phenomenon is Valentinian I, who was present in the region more often than any other Roman emperor. Although Valentinian I may be regarded as a typical ruler of Late Antiquity, he is barely known to the general public.

The exhibition predominantly presents new archaeological finds from the Palatinate. A number of audiovisual elements, including a cycle of large-format artists’ reconstructions on various topics as well as media and audio stations were developed for the exhibition. A short press review can be found here. An accompanying volume to the exhibition written by the staff who conceived it presents the current state of research on the subject, which was also discussed at a conference in Speyer in October 2018 organized jointly with the Historischer Verein der Pfalz (a local history organization).

In cooperation with the Leibniz Institute for the History and Culture of Eastern Europe (GWZO) and the Balaton Museum Keszthely in Hungary, the 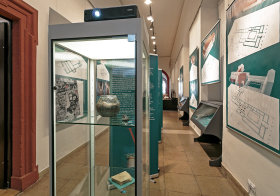 HCCH has organized an exhibition dedicated to visualizing archaeological cultural heritage. 3D reconstructions, representations of scenes from daily life and models of buildings excavated since 2009 will be developed and displayed as part of a German-Hungarian research project involving Heidelberg University. Important archaeological finds from the site will also be exhibited.

In the 4th century AD, a 15 hectare fortress was built in Keszthely-Fenékpuszta (modern-day Hungary) in the Roman province of Pannonia. Archaeological investigation of this site on the western shore of Lake Balaton, which has taken place since the late 19th century, has uncovered fortified and monumental buildings as well as numerous graves. They offer insights into the history of the colonization of this site, which lasted for around 400 years. 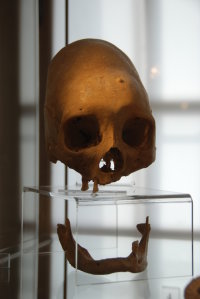 In cooperation with the Lobdengau Museum in Ladenburg and the Landesamt für Denkmalpflege Baden-Württemberg (the agency for preservation of monuments in BW) the HCCH began developing the concept for an exhibition dedicated to the transition period from antiquity to the Middle Ages in the Lower Neckar region and especially in Ladenburg in 2014. Students from Heidelberg University were also intensively involved in this through courses and internships. There was intense press coverage.

The historical processes that took place in the centuries between the decline of the highly developed civilization in the Roman provinces on the Rhine and the emergence of new settlements in the early Middle Ages were until recently unknown.  In Ladenburg, the period from the 3rd to the 9th century A.D. was an epoch of significant upheavals that profoundly changed the former capital Lopodunum. More recently, new methods of historical and, in particular, archaeological research have contributed to a better understanding of these processes. The new 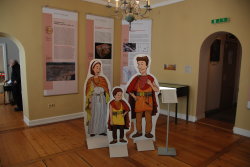 research results have been made accessible to the general public through the exhibition. As well as numerous archaeological exhibits, there were two films and two audio stations. A (fictitious) family history was also created and depicted using silhouette images to show visitors the changing identities of the inhabitants of Ladenburg during this period of transformation. The exhibition was accompanied by an extensive illustrated book written by the members of the exhibition team.

The illicit traffic in archaeological heritage is the subject of an exhibition on display at Heidelberg University. It focuses on European campaigns against looting and unauthorized excavations. Case studies document the paths taken by stolen objects and show how illicit traffic in antiques can be countered through joint efforts. The exhibition is based on a cooperation between the Greek Ministry of Culture and Sport, the Badisches Landesmuseum (State Museum of Baden) and the Zentrum für Altertumswissenschaften (Centre for Studies of the Ancient World) as well as the Heidelberg Center for Cultural Heritage at Heidelberg University. Following the dates in Heidelberg, this travelling exhibition will be shown in Karlsruhe and Brussels. 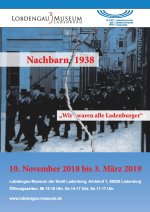 On the occasion of the 80th anniversary of the Reichspogromnacht on 9 November 2018, lecturers and students of the Hochschule für Jüdische Studien Heidelberg (Heidelberg College for Jewish Studies) and Heidelberg University have conceived an exhibition at the Lobdengau Museum in Ladenburg. The exhibition offers an insight into the events in Ladenburg in 1938 and goes beyond the established facts and figures to focus on the town's inhabitants and their relationships with each other: Who were the people who lived next door to one another? What stories and events shaped the families? What happened after 1938?