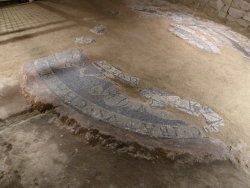 Schuttern Abbey is one of the first monastic sites to be founded in the southwest of Germany. Its importance in the Carolingian era can be seen from the fact that it was among the wealthiest Franconian abbeys at the beginning of the 9th century. At that time it also had a high-quality scriptorium, which produced the famous 'Schutterner Evangeliar', a gospel book which can be found today in London. Later, probably in the course of the 11th century, one of the very few figurative mosaic floors north of the Alps was created in the abbey church.

The community of Friesenheim, Heidelberg University Library and the HCCH have set themselves the goal of increasing the visibility of the history of the abbey and making it easier to experience through various measures. The focus is on establishing a Virtual Schuttern Abbey Library at Heidelberg University Library (in cooperation with the Department for Latin Philology of the Middle Ages and the Modern Era at the Historical Seminary and redesigning Schuttern Abbey Museum. 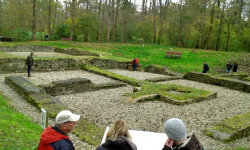 The Zullestein, which is in the municipality of Biblis, is one of the most important monuments in southern Hesse. The site dates back to a small late Roman fortress (burgus) built not far from where the Weschnitz converges with the Rhine. The fortress was used continuously from Roman times to the Early Modern era. In the early Middle Ages the Zullestein royal estate came into possession of Lorsch Abbey, which had a Rhine port (portus) and market here. In the Middle Ages, the castle of Burg Stein was an important regional seat of power. After the excavations in the 1970s, the ruin remained a little-noticed cultural monument in the middle of the Rhine floodplains. The HCCH is working on further research into the Zullestein together with the World Heritage Site of Lorsch Abbey and hessenARCHÄOLOGIE (the agency for preservation of monuments in Hesse). The new findings are to form the basis for a new tourism concept, which will focus on increasing local and national awareness of the site as an important cultural monument.

Multidimensional Perceptibility of Cultural Heritage (MUSIEKE): Development of an interdisciplinary methodology to optimize measuring, viewing and understanding of cultural change in real and virtual spaces

How do different epochs and disciplines deal with the relics of the past? How does an object become a symbol and a cultural heritage? What becomes visible when cultural heritage is digitized? These questions are what drive researchers from a wide range of disciplines. 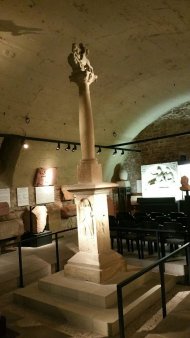 Using the example of a monument from the Roman town of Lopodunum (Ladenburg), an attempt is being made to develop a comprehensive methodology for increasing public awareness of and the ability to experience cultural heritage.

The Giant Jupiter Column from Ladenburg is a prime example of how people in different eras have dealt with cultural heritage. Soon after it was constructed (around 200 AD), it was damaged several times, restored and finally disposed of in a well. It was not until 1973 that it was rediscovered during construction work in Ladenburg and brought to the Lobdengau Museum in Ladenburg. However, hardly any research as been conducted on it to date.

This is now being redressed in a project financed as part of the HeiKA Research Bridge. For the first time, it was possible to see the archaeological context and analyze the monument thoroughly from a historical and art-historical point of view. A new, high-resolution 3D scan of the column was also conducted. Finally, the monument was embedded in the modern cultural landscape of the city of Ladenburg. The MUSIEKE project contributes to the strengthening of research teaching and to the vitality of the research partnership between Heidelberg and Karlsruhe.

The initial research activities were coordinated by the Centre for Cultural and General Studies at the KIT Karlsruhe. In addition to the HCCH, the Institute of Photogrammetry and Remote Sensing (IPF) at the KIT is also involved. Other participants include the Geoinformatics Department and, in particular, the Forensic Computational Geometry Laboratory (FCGL) at Heidelberg University.

The Stiftung Preußischer Kulturbesitz (Prussian Cultural Heritage Foundation) (Berlin), the Fraunhofer Institute for Secure Information Technology (SIT) in Darmstadt and the GESIS - Leibniz Institute for the Social Sciences (Mannheim) are together researching unreported illicit traffic in cultural assets as part of the Schutz vor organisierter Kriminalität (Protection against Organized Crime) guideline sponsored by the German Federal Ministry of Education and Research (BMBF). In the pilot project, the project partners are concentrating on ancient cultural assets from the eastern Mediterranean region.

The HCCH is involved in the joint project as an associate partner and has actively participated in the dissemination of research results in university teaching, for example through a number of summer schools . 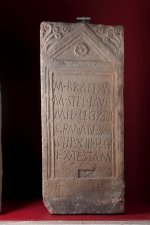 The aim of this project, which is funded by the Fitz Thyssen Foundation, is the detailed documentation, scientific processing and public exhibiting of Roman stone monuments at the REM Mannheim. This is one of Germany’s most important collections of Roman tombstones, consecrated reliefs, milestones, architectural elements and other inscripted stones. To this day only only a few of the pieces have been made available to the public. The collection consists of around 120 objects, almost half of which come from the Rhine-Neckar region and provide information about the cultural history of the region. The foundation for other half of the collection is Prince Elector Carl Theodor’s passion for collecting. They were purchased from various parts of Germany in the 18th century by the Prince Elector himself and later by the Mannheimer Altertumsverein, a cultural heritage organization. The pieces are therefore not only important for the history of society, religion and mentality in the Mannheim area; they are also a testament to the initially courtly - later bourgeois - passion for collecting and are thus of extraordinary importance for the history of reception.

The project is conducted in cooperation with the Institute of Classical Archaeology at the University of Tübingen, the REM Mannheim and the Mannheimer Altertumsverein. In spring 2016, a workshop organized by the HCCH took place in Mannheim and Ladenburg. 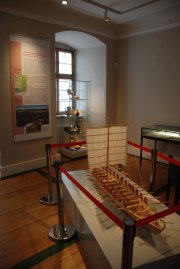 Ladenburg's historical self-image is based primarily on evidence from Roman times and the Middle Ages. This evidence still has a strong presence in the townscape today. However, the epochs of Late Antiquity and the early Middle Ages remain largely unscrutinized. It is only possible to discover these eras through the rich archaeological finds from the town and the surrounding area, most of which are stored in the Lobdengau Museum in Ladenburg. During the course of a smaller research project, the processing of important finds from the 3rd to 9th centuries A.D. revealed that Ladenburg and the Neckar estuary are a key region for understanding the various historical processes during these times of upheaval. The reappraisal received financial support from the Landesamt für Denkmalpflege Baden-Württemberg (the agency for preservation of monuments in BW).

The research results were presented to the general public at the Lobdengau Museum exhibition Big Worlds - Small Worlds. Ladenburg and the Lobdengau between Antiquity and the Middle Ages (2017/18). An extensive volume accompanying the exhibition not only summarizes the results, but also illustrates the position of these less well-known epochs in regional and national history. In addition, a volume with the most important scientific findings from a conference organized by the HCCH in Ladenburg in November 2014 will be published at the end of 2018. The conference is also supported and financed by the Landesamt für Denkmalpflege Baden-Württemberg (the agency for preservation of monuments in BW).