Politics in Times of Crisis

Stefanie Walter investigates the behaviour of governments in times of economic crisis.

Her interest is in crises: financial distress, crashing currencies, economic downward spirals. And in the governments of the countries concerned: How do they react? How quickly do they introduce necessary reforms? And to what extent are their actions governed by political interests? In 2008, Stefanie Walter became a Junior Professor of International and Comparative Political Economy at Heidelberg University's Institute for Political Science. She wants to find out why some governments correct their economic policy in time while others delay reforms until the last possible moment, a strategy that frequently ends in economic crisis. Her main focus is on the political reasons for such delay, such as imminent elections or lobbying by special interests.

Take Thailand, for instance: The spectacular crash of the Thai currency in the summer of 1997 was one of the most memorable events of the Asian Financial Crisis, according to Stefanie Walter. The currency had been overvalued for several years, but the government did not adjust its policies accordingly, and chose instead to sell its entire foreign currency reserves. Only when they were depleted did the government allow the exchange rate to adjust. The result: The currency lost more than half of its value, plunging the country into a severe economic crisis. Walter has analysed this crisis along with three others for her book “Averting Crisis: The Political Economy of Macroeconomic Adjustment” which she completed in March. The book shows how macroeconomic policies are influenced by the extent to which changes in the exchange and interest rates affect voters' and firms' purchasing power and competitiveness.

Stefanie Walter developed an early interest in politics: To be allowed to stay up longer, she watched the nightly news programme with her parents, who explained what she saw and heard to her. Later she studied public administration in Konstanz, a study programme that combines political science and management. After five years spent working and researching at the ETH Zurich and at Zurich University, she was looking for new perspectives.

She received three job offers and decided on Heidelberg. “What prompted my decision was the fact that the university was going to greatly expand the subject of Political Economy within the framework of the Excellence Initiative”, says the 34-year-old scientist. “To be part of that is a special opportunity”. The subproject “Economics & Social Science” of the Heidelberg Institutional Strategy, with which the university intends to strengthen and connect the areas of political science, economics and sociology, led to the creation of several new positions, among them two junior professorships. One of them is now held by Stefanie Walter. “It's rare to find a professorship that is so exactly tailored to your own interests”, she says. The endowment with a part-time assistant position and a budget of 10,000 EUR a year gets her scientific career off to a very good start, she adds. Walter's next goal is a full professorship.

Globalisation is another focus of Stefanie Walter's research. She examines how the effects of the global competition determine individuals' feeling of economic security and the voting behaviour of different groups of persons. Well-educated and trained people benefit from globalisation because they can market their skills internationally. They face low labour market risks and therefore are less interested in policies that reduce these risks. Less qualified workers in globally exposed industries, on the other hand, are the losers of globalisation according to Walter: “Their jobs are most likely to be outsourced to another country, and their products are often replaced with imports from low-wage countries.” Such people feel more insecure on the job market and demand more protection from their governments. Walter could show this by investigating elections in Switzerland in which globalisation losers typically voted for the Social Democratic Party.

“Politicians who want to alleviate the effects of globalisation should therefore aim their reforms specifically at globalisation losers”, concludes Walter. A policy targeted at the less qualified in general - not just in industry - also includes the large group of persons that are little or not at all affected by international competition, she adds. “For these people, other developments like the increase in temporary employment and jobs with little social security are much more pressing problems.” Walter presented her findings at the 2010 conference of the International Political Economy Society. Her paper “Globalization and the Demand- Side of Politics: How Globalization Shapes Individual Perceptions of Labor Market Risk and Policy Preferences” won the best paper award at the meeting.

Walter's next project is an investigation of the euro crisis of 2011: she wants to analyse the crisis management and its effects on the currency. Among other things, she is interested in why some countries were better able to procure financial help than others.

But for now, the world's financial crises will have to wait: Stefanie Walter has been on parental leave since the beginning of the summer semester 2011. By now, she is an expert at handling a child and a laptop at the same time, she says. “Actually I'd planned not to work at all, but that was an illusion.” Her son Nils seems to be very understanding of his mother's scientific work: he was born the day after she finished her book manuscript. 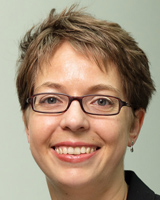 Stefanie Walter studied public administration and political economy at the University of Konstanz. She then transferred to Zurich, where she earned her PhD at the Swiss Federal Institute of Technology (ETH) and later worked as a Research Assistant at the University of Zurich. She spent a year at the Weatherhead Center for International Affairs of Harvard University on a Fritz Thyssen Scholarship. In 2009, she accepted the job offer of Heidelberg University. Her research focuses on the question of how distribution conflicts, political preferences and institutions influence economic policy decisions.