Children’s Quarrel in the Milky Way – Who Flew over the Galaxy Rim?

The state observatory could ring any time. Rowan Smith would take the call – she speaks enough German to understand the brief message: “Wir haben einen gefunden “ – we’ve found one. They might have detected a red dwarf, or gamma radiation from the early days of the universe. The observatory staff is looking for evidence to corroborate the results of a simulation by Rowan Smith, postdoctoral researcher at the Institute of Theoretical Astrophysics (ITA) of Heidelberg University’s Zentrum für Astronomie (Centre of Astronomy), and her colleagues. The discovery, which so far is limited to a computer simulation and was published in the February 2011 edition of “Science”, could lead to a paradigm shift in astronomy: the first stars were not alone.

Earlier theories had assumed that the first stars were isolated accumulations of helium and hydrogen. They grew to 100 to 300 times the sun’s mass and burned up their fuel very quickly by means of nuclear fusion. The enormous mass of these stars generated a constant high pressure. After approximately a million years, however, the fusion tapered off, the metal-free giants collapsed and exploded. These phenomena, called supernovae, marked a milestone of cosmic evolution, because the first stars, like big furnaces, generated new elements within themselves. “Everything we see here”, says Smith and points across the market square in Heidelberg’s Neuenheim district, “consists of elements that were created in these stellar furnaces.” Listening to her talk about the beginnings of the universe, one is suddenly transported far away from the lively atmosphere of the café.

At Scotland’s elite university of St. Andrews, Smith examined star formation in the local universe, our Milky Way. She was fascinated by the fact that interstellar gas clouds produce stars of very different sizes, depending on the cloud’s temperature and chemical composition. “But wherever we look, in the Milky Way and in neighbouring galaxies, we always find a similar distribution of heavy and lighter stars. That’s what I want to explain.”

But how exactly does temperature influence the birth of new stars? For a long time, scientists only knew that the gas clouds that form stars expand through heat radiation. This means that temperature and gravity act as opposing forces and the outcome of their “struggle” determines whether or not the gas cloud collapses to form a star. Progress came in the form of Heidelberg astrophysicist Simon Glover: he was able to calculate the chemistry of the universe and typical reaction equations with such accuracy that scientists could enter tangible values in the simulation of star evolution. A case for Rowan Smith. Just before her 25th birthday, she had submitted her PhD thesis. Now she could continue her research in Heidelberg, with financing from the Innovation Fund FRONTIER of the Excellence Initiative. Her new focus: The time in which the first stars were born from the cosmic obscurity of dark matter and widely dispersed gas. “This phase is not easy to observe”, she says. “At least that’s what we thought until now.”

Because now, with the discovery of the Heidelberg researchers, the case doesn’t seem quite as clear. The scientists showed that the first stars were not loners, but that frequently at least two, and sometimes even more stars must have been created from a single gas cloud. A children’s quarrel in the Milky Way that really made sparks fly. “Smaller stars might have been spit out into the universe”, explains Rowan Smith. If they had less than 80 per cent of the sun’s mass, they could have survived to this day as “red dwarves” – and be visible to telescopes in Chile or Hawaii. “Sure, we might have seen them earlier”, admits Smith, “but I still wouldn’t be surprised by a call from the observatory.” X-radiation or gamma radiation that is created when one of these binary stars dies and transfers its gas to its sibling should also still be visible today.

The earlier scientists didn’t have it all wrong. They just couldn’t keep on calculating once the first star had been formed in their simulation. The more the gas cloud coalesced to form a nucleus, the more time steps the mainframe computer had to calculate. “From a certain density onward that simply becomes too expensive “, explains Smith’s colleague Paul Clark, main author of the article in “Science”. Smith and Clark had already worked together in St. Andrews.

To solve this dilemma, the Heidelberg astrophysicists used a trick: instead of focussing on the increasingly dense gas nucleus, they replaced it by a place - holder called a “sink particle”. “It was like saying: ‘Okay, you won, you get to become a star, but we want to know what happens next‘“, explains Rowan Smith. And sure enough: not all of the material that was sucked in could be transported quickly enough to the original nucleus. Instead, most of it accumulated in a rotating accretion disc. At some point, this disc broke down and formed several spiral arms with additional stars – all within less than 200 years.

Even before the researchers suggested the publication of their discovery in “Science”, they knew of one legitimate objection: Because there was only helium and hydrogen in the early universe, it was difficult for the first stars to cool off sufficiently. However, in order for the nuclei in the gas cloud to keep compacting, they had to give off heat – they broke down hydrogen molecules into atoms to control the temperature. But the general assumption is that at some point, definitely when there were only hydrogen atoms left, it would grow too hot for new stars to be formed. Rowan Smith was able to show that while the heat of the first star did not allow for the creation of a second in the immediate vicinity, additional stars could develop further away in the same accretion disc – at a distance of at least 20 times the distance between the earth and the sun. “She invalidated the most important objection to our publication in advance”, says Paul Clark. He was thrilled, as was Ralf Klessen, Smith’s and Clark’s boss at the ITA.

It was not by coincidence that other British researchers besides Smith and Clark came to Heidelberg. “Research funding in Britain was very much reduced during the financial crisis, especially funding for postdoctoral researchers”, says Rowan Smith. “In Heidelberg I could keep doing high-quality work; that was important to me.” Clark had transferred to Heidelberg in 2006, three years before her. Since then, the “Star formation” research group that was established by Ralf Klessen in the same year has grown to include more than 15 scientists. “With the ITA, the State Observatory, the Astronomisches Rechen-Institut (astronomy computing institute) and the Max Planck Institute for Astronomy, Heidelberg is one of the most exciting places on earth for astrophysicists”, says Smith. She is especially happy about the Kolob supercomputer that was partly financed by the Innovation Fund FRONTIER and put into operation in the autumn of 2008. “Now we can concentrate completely on our research instead of always having to apply for computing time some - where else.”

Smith wants to know how stars interact with each other and under which conditions they might be ejected from the gas cloud. She will soon travel to Kyoto, Japan, where she will meet with scientists whose work begins where her group left off: inside the sink particles.

Rowan Smith earned her PhD at the young age of 25 and joined a group of older and experienced scientists in Heidelberg who received her with open arms. “She brought a lot of energy to the place”, remembers Paul Clark. And she didn’t confine her energy to the ITA – Smith threw herself into life in Heidelberg, learned to dance salsa at Ziegler’s and invited her colleagues to her Neuenheim flat for Scottish shortbread. She visits her home town of Wishaw, near Glasgow, as often as possible. The last time was at Christmas, when she gave a speech in church, “in front of industrial workers and simple folk”, as she says. It was good practice, trying to make complex research understand - able to ordinary people. The subject she chose was in keeping with the occasion: astronomical theories on the Star of Bethlehem. 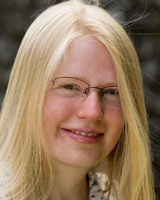 Rowan Smith studied astrophysics at the University of St. Andrews in Scotland and earned her PhD in 2009 at the age of 25. Since then, she has been working as a postdoctoral researcher at the Institute of Theoretical Astrophysics, investigating the formation of the first stars after the Big Bang. To this end, she simulates the exact chemical composition of the early universe and observes current star development. Her position is financed by Heidelberg University’s Innovation Fund FRONTIER. She applied for, and was granted, continued funding from the German Research Foundation that will allow her to continue working in Heidelberg after the end of the FRONTIER funding.