Searching for the Optimum

Mathematician Katja Mombaur teaches robots to walk – looking to nature for inspiration. But she also uses scientific computing to solve medical problems: among other things, she wants to optimise artificial limbs to make them into best possible replacements for lost appendages.

There is a life-sized skeleton in Katja Mombaur’s room, and a large board on the wall names the more than 200 bones of the human body down to the smallest one. These are unexpected accessories in the working space of an engineer and mathematician. “Our most important goal is to better understand human movement”, explains Mombaur. The way that humans walk or run, their gestures or how their movements change when they are angry or happy - all that is still a mystery.

Exact knowledge of how bones, muscles and nerves work together to enable complex movements is essential for the various applications on the wish list of Mombaur’s research group “Optimization in Robotics and Biomechanics” at the Interdisciplinary Center for Scientific Computing (IWR). The Heidelberg mathematician and her colleagues want to help humanoid robots develop more human-like movements, enabling them fulfil tasks that are dangerous to humans – such as looking for and disarming mines, extinguishing fires or cleaning up after natural disasters. But Katja Mombaur is more interested in the medical benefits of her research, such as the development of intelligent and optimised artificial limbs that can replace the biological functions of a lost appendage to the greatest possible degree.

Just as the movements of simple objects can be described mathematically – take Isaac Newton’s famous falling apple – so can complex human movements be expressed in algorithms, simulated and optimised on a computer, explains Katja Mombaur. During her earlier work at LAAS-CNRS, a large research institution in Toulouse, she used this method to teach one of the best humanoid robots in the world to play with a yo-yo. To help the humanoid machine develop the required sensitivity, the researcher analysed the yo-yo game of a human, divided the complex process into different phases and then described each sequence of movements with an individual mathematical model. The result is a robot that can play with surprising dexterity.

In 2010 the mathematician transferred from France to Heidelberg, where she was appointed to a start-up professorship within the programme “Career chances for junior scientists” of the University’s Institutional Strategy. The Excellence Initiative, says Mombaur, enabled her to “establish a large and highly active work group for a very interesting basic research subject with promising applications”.

The work group is currently investigating ways to improve the stability of two-legged robots. “Most topple over when you force them to move faster”, says Katja Mombaur. Here, too, the scientists must begin by observing the human original and understanding what allows us to keep our position stable when we walk. In order to come even closer to the human body that was optimised by evolution over millions of years, the researchers must also consider the emotions that accompany the movements. To this end, Katja Mombaur is working with cognitive scientists to analyse how body posture changes when a person is sad, happy or angry, and applying the findings to her mathematical models.

“We do mainly basic research”, says Katja Mombaur. She explains that, in order to fulfil the complex requirements of this research field and optimise the cognitive process, it is necessary to create a multitude of cross-links between scientific computing and other areas of research such as engineering, psychology, biology and medicine. And, the scientist admits with a wink, she is still working on her own “optimisation”. At the moment, she works mostly at night – “because of my two kids”. Getting through the day on a minimum of sleep – that’s a problem she still needs to solve. 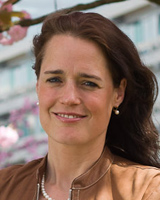 Katja Mombaur studied aerospace engineering at the University of Stuttgart and in Toulouse and earned her PhD in mathematics in 2001. In 2010 she became a professor at the Interdisciplinary Center for Scientific Computing of Heidelberg University. She heads the work group “Optimization in Robotics and Biomechanics” and the robotics lab. Her scientific work centres on modelling, simulation and optimisation of anthropomorphic systems, i.e. of humans, humanoid robots and virtual characters.