Giant telescopes, supercomputers and new satellites are symbols of the present golden era of astronomy. Cosmologist Matthias Bartelmann, member of the Board of the Heidelberg Graduate School of Fundamental Physics (HGSFP), and his colleague Christian Angrick, who earned his PhD at HGSFP, doubt the benefits of being able to compute increasingly complex models. They believe that simpler models would yield deeper understanding.

Matthias Bartelmann Yesterday, we submitted the application for the third funding line of the Excellence Initiative, which means that after seven months, I can finally get back to my research. I've neglected my work ing group, and there are a dozen final papers on my desk that need to be looked at.

That doesn't sound as though the Excellence Initiative improved your research conditions.

Bartelmann But it did, especially in physics. We've improved the quality of our education with structured PhD programmes, and we've established a professional administration. Our PhD students are now supervised collectively by three lecturers, and our teaching staff's been supplemented by two temporary professors. Plus, the four junior research group leaders of the HGSFP have really become indispensable. When you give responsibility to postdocs, they get creative. They're independent and can challenge me quite aggressively in seminars. That's an invaluable experience for students. We have to preserve this culture of discussion.

How have you benefited from the Excellence Initiative?

Bartelmann Without the Excellence Initiative, our research would never have taken off the way it did. The Initiative proved that increased funding can really advance research. That should convince the public authorities to invest more in science in the long term. But in any case we need more reliable basic funding. Here at the institute there are five permanent positions as opposed to 50 staff members financed by third parties - but high-risk research doesn't just work with third-party funding and five-year-plans. In this respect, Christian Angrick's work was quite unusual.

Bartelmann After his oral diploma exam, I told him about an idea of mine that I wasn't even sure would work. Most others would have been scared off, but he was hooked immediately.

What was the idea?

Christian Angrick As cosmologists, we're interested in finding out how old the universe is, how much matter and dark energy it contains - there are several theoretical models on this subject whose informative value we verify constantly. To do that, we investigate galaxy clusters - at first glance, these clusters are accumulations of galaxies and hot gas, but they actually consist largely of dark matter. I wanted to find a completely new method of estimating the number of galaxy clusters that we would have to find if we were living in a certain cosmological model. Until now, we had always determined this number based on the clusters' mass - the problem with that approach is that this mass can't be clearly defined. I found a way to circumvent that: galaxy clusters can actually be characterised exclusively by means of the temperature of the X-radiation that is emitted by the gas inside the cluster.

And how does that help us to better understand our universe?

Angrick The result of my research is a curve that assigns a number of galaxy clusters to each X-ray temperature. A model that assumes certain amounts of dark energy and dark matter has to produce such a curve in simulations. Otherwise it's faulty and must be corrected.

Angrick Friends of my parents allowed me to look through their telescope from time to time - we observed the rings of Saturn, for instance. I was fascinated. We are tiny cogs in the large wheel of the universe, and we try to grasp it even though it has nothing to do with our everyday life. But a lot of questions remain - for instance, we still don't know what dark matter is made of.

How have the increasingly powerful instruments at our disposal changed the face of astronomy?

Bartelmann It's true that we're living in the golden era of astronomy. The Planck satellite, a multinational project in which I headed the German team for five years, covers the last unexplored wavelength range. When we started out with Planck, we didn't know how we would store five terabytes of data. Today, you can fit data carriers with that capacity into your shirt pocket.

Angrick Also, complex simulation computations are now faster and have a higher resolution. The sheer scope of computation required for my PhD thesis would probably have made the project impossible at the beginning of Mr Bartelmann's career.

Bartelmann Well, Christian Angrick didn't break new ground because of computers, but because he dared try a completely new approach. That's what's missing today, in my opinion. As long as we keep on simulating the same models with higher resolutions, we run the risk of replacing the bewildering reality with bewildering com plexity. Our models are becoming increasingly complex because our computers can handle it. But real progress would mean simplifying them. We don't have the time for real qualitative leaps. To achieve those, we'd have to be able to pore over a problem for a few months.

Mr Angrick, was everything better in the good old days?

Angrick I was lucky, because my thesis generated a result that is scientifically relevant on its own. That's not the case with every PhD thesis - and it certainly has to do with the fact that I was allowed to sit in front of a blank sheet of paper for a few weeks, to come up with and then discard some wild ideas. So yes, I do support that point of criticism - I'd rather spend two years working on a really good project than publishing a number of half-baked papers.

How do you benefit from the Graduate School?

Angrick I had attended most of the obligatory lectures before my diploma. I benefited most from the Physics Graduate Days - a week of lectures on various special fields of research; that was a really exciting introduction to other subject areas. Also, the Graduate School offers job application training and help on improving your rhetoric and presentation skills.

Bartelmann I used these video recordings to improve my lectures, too. It's very humiliating when you see yourself for the first time in the auditorium, but in the end it was really helpful.

Angrick And the Graduate School gave us 20,000 EUR for a winter school in the Alps that I helped organise, among other things. I invited researchers to the school that I might otherwise never have met. When these people give lectures, it's much easier to ask questions if you've already played cards or skied with them. In that kind of informal setting, it's easy to get to talking with other PhD students, too.

Bartelmann Some colleagues were afraid that the students would use the money to give parties or organise a beach volleyball tournament, because we didn't specify what they should do with it. I was thrilled with the results - I'm very proud of them.

What keeps you interested in astrophysics after all these years?

Bartelmann When I started out, the cosmological frame work model was still quite fuzzy. Today it's a sturdy construct that we can fill with life. For instance, we've learned a lot about some cosmological parameters - such as the Hubble constant, which describes the rate at which the universe expands. But even with everything we've learned I'm still awestruck.
He takes a paper clip and throws it into the air.
Imagine that his paper clip suddenly flies up faster at two meters' height than before. Nobody would believe that. But that's what the universe does. And that's what I find fascinating. 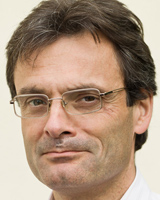 Matthias Bartelmann became Professor of Theoretical Astrophysics at Heidelberg University in 2003 and is a member of the Board of the Heidelberg Graduate School of Fundamental Physics (HGSFP). After his PhD thesis on gravitational lens effects at LMU in Munich and the Max Planck Institute for Astrophysics in Garching, he transferred to the Harvard-Smithsonian Center for Astrophysics in 1994, where he worked as a postdoctoral researcher, before qualifying as professor in Munich in 1998. Before he came to Heidelberg, he headed the German team in the Planck satellite mission. 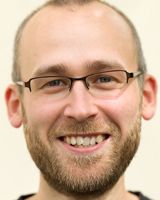 After completing his studies of physics at Heidelberg University, Christian Angrick earned his PhD at the Heidelberg Institute of Theoretical Astrophysics. His PhD thesis, submitted at the Grad uate School of Fundamental Physics, dealt with the question of how the number of galaxy clusters in the universe can be predicted without an estimation of their mass. The 30-year-old scientist married his fiancée two months before being awarded his doctoral degree.