Frauke Melchior discovered SUMO, a small protein with a big impact. She credits her discovery to a bit of luck, an eye for the unexpected, and a lot of solid craftsmanship.

A little plastic Japanese wrestler reminds Frauke Melchior of the long, but enjoyable process it took to find a name for her favourite protein. Fifteen years ago, Melchior and her colleagues spent a week searching for an abbreviation for the new molecule she had detected – something catchy and easy to pronounce, not the usual tongue-twister combination of numbers and consonants like USP25 or DPP9. Melchior's favourite was SURF. After all, the laboratory in the Californian city of La Jolla had a view of the ocean. And the name “small ubiquitin related factor” indicates that a tiny protein acts in a manner similar to ubiquitin – a protein that is known as the rubbish collection service of cells. It attaches itself to other proteins, thus marking them as waste.

If the name had not already existed, there might be a surfboard standing on Melchior's window sill today. As it is, the researchers decided on SUMO for a “small ubiquitin related modifier”. That was easy to pronounce and fired the imagination of some editors. “SUMO wrestles other proteins”, they soon wrote in their journals, as a way of describing what the new protein did. “It was like marketing for our research”, Melchior says today. Suddenly, groups of researchers all over the world were working on this subject.

It had all started a few days earlier with an experiment that Melchior will never forget. She wanted to examine RanGAP, a “gatekeeper” enzyme that helps to determine which substances are transported from the cytoplasm into the cell nucleus and back into the cytoplasm. Melchior noticed that the enzyme occurred in two forms, one of which was longer than expected. Only this longer version remained stable at the pores between the nucleus and the cytoplasm. But what did the additional length consist of ? Melchior and a colleague checked a database. The additional amino acids were similar to ubiquitin, the computer found, but at 18 percent, the match was not a close one. Close enough, though, to make Melchior curious. She was familiar with ubiquitin and the way it modifies other proteins. Was this a new substance that acted in a similar manner – modifying RanGAP in such a way that it could dock with the nuclear pore complex?

Based on this vague idea, Melchior began a second experiment. Ubiquitin, she knew, occurs in every cell that has a nucleus, and it needs energy to dock with other proteins. So she mixed the short version of RanGAP with a random cell extract and adenosine triphosphate as an energy supplier. Would the short version combine with the new protein and thus explain why there was also a long version of RanGAP? In the following hours, Melchior separated the proteins of the cell extracts according to their size, transferred them to a membrane and added antibodies that were supposed to make both versions visible. She dyed the membrane, washed it, and spent every free minute inbetween to discuss her idea with colleagues. “I've always worn my heart on my sleeve”, she says. “We were already dreaming of all that we'd do in the next ten years with such a discovery.” Sometime late at night, the developer finally spit out the X-ray film, and she got her answer. Sure enough: the short form had turned into the long one, because RanGAP had bonded with the new protein that later came to be known as SUMO. The RanGAP protein was “sumoylated”. And because it remained stable in this condition, Melchior could examine it at leisure. A rare spot of luck, as she realised later on.

“Most proteins immediately disengage from SUMO”, she explains. That is why other researchers had already seen SUMO signals in their experiments, but had not understood them. Melchior recognised “her” protein because she got lucky. But she was also successful because she had sharpened her tools. She usually produces the antibodies herself that are supposed to recognise specific proteins in experiments. “It’s the only way to be sure that they mark just the one protein I'm looking for.” And she recognised SUMO because she knew how ubiquitin works. “That's why I make my PhD students attend seminars even though they'd rather work at their experiments in the lab. Otherwise they might discover the greatest phenomena and not even realise what they've found.”

After her discovery, it took Melchior just a few days to give her research a new direction. She was sure that SUMO was a decisive factor for processes “all over” the cell and that her discovery would open up a whole new field of research. She wanted to use this impetus to gain independence from her scientific mentor Larry Gerrace. He gave her plenty of rope. “He left the subject to me from day one, which really impressed me.”

Melchior loves the atmosphere in the lab. She looks in several times a day to check results and discuss ideas. And she, too, gives her colleagues the freedom they need. Guillaume Bossis, a postdoctoral researcher from France, originally wanted to identify additional proteins that are linked to a specific variant of SUMO.

In his experiments, he happened upon a mechanism that lets cells use minute amounts of hydrogen peroxide to block sumoylation. Because larger quantities of hydrogen peroxide play a decisive role in oxidative stress, which is linked to ageing and cancer among other things, Bossis immediately changed course with his project. “Of course he was allowed to do that; I’d done the same myself”, says Melchior.

SUMO interacts with hundreds of proteins, and in discussions Melchior frequently learns that other Heidelberg research teams are already working on the same proteins. The committees of professors that supervise PhD theses at the HBIGS graduate school are one perfect source of information. “At the annual meetings, I get detailed intel on what my colleagues are working on”, she says. “That's how we find common ideas.”

For Melchior, the most important benefit of the Excellence Initiative has been the creation of a permanent framework for knowledge exchange. “Put scientists together in a room, and they'll hatch new ideas – it's like an incubator.”

She met Stefan Herzig during a retreat of the alliance between the Center for Molecular Biology (ZMBH) and the German Cancer Research Center (DKFZ). He analyses how the metabolism is regulated and how defects in this regulation may lead to diabetes and cancer. Since important regulatory proteins that he investigates can bond with SUMO, Melchior and Herzig now want to find out together if their sumoylation has an impact on metabolic functions. Stress and external stimuli, that much is certain, can change the overall pattern of sumoylation – heat shocks and dryness for plants just as hibernation for squirrels or strokes in animal models. Melchior and many other scientists want to explain the significance of such global changes in the long term. Some proteins change their form when they bond with SUMO, or can create new bonds. In others, the bonding sites are blocked by the small protein. All these modifications are likely to play an essential role in many diseases. For instance, Melchior and Jochen Weisshaupt, a researcher from Göttingen, found that proteins that clump together in Parkinson patients remain in solution if only a small part of them is sumoylated. Frauke Melchior is not ready to speculate on the possible meaning of this discovery. She'd rather plans her next experiment. 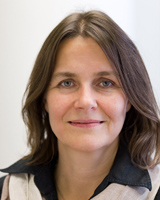 Frauke Melchior studied chemistry in Marburg and Bristol and earned her PhD in chemistry from the University of Marburg. She worked in Göttingen for two years before she discovered the SUMO protein at the Scripps research centre in La Jolla. As a junior research group leader at the Max Planck Institute for Biochemistry in Martinsried, near Munich, she explored the mode of functioning and regulation of SUMO. In 2004 she became Professor of Biochemistry in Göttingen before accepting the chair of Molecular Biology at the ZMBH in Heidelberg in 2008. She serves on the Grants Committee for Research Training Groups of the German Research Foundation and was distinguished in 1999 with the Young Investigator Award “Bio-Future” of the Federal Ministry of Education and Research. In 2005 she received the Binder Award of the German Society for Cell Biology, and in 2007 she was elected a member of the renowned European Molecular Biology Organization EMBO.