German Archaeological Expedition to the Sultanate of Oman

Our Mission has conducted research and cultural management projects in cooperation with the Sultanate's Ministry of National Heritage and Culture since 1977. In different ways, and owing to an interdisciplinary approach, the Mission has illuminated the prehistory of this Arabian land. Originally the emphasis centred on localising the copper land Magan/Makkan which is known from cuneiform texts.
The Mission is sponsored by the German Mining Museum and the Institute for Prehistory of the University of Heidelberg.

1977-78
Prior to the planned reopening of the open cast and tunnelled copper mine at Arja, the surrounding area was investigated. The area including Bayda was aerially mapped. Mineralogical and archaeometallurgical samples were taken for analysis. The smelting sites Lasail and -al Sayab were studied. These sites were in use over several periods, although not all are fully represented.

1979-80
The main object of the investigations at al Maysar M1 were the Bronze Age (Umm an Nar Period) remains of a smelting village and mines. But several other important sites were investigated and documented, including tombs (M4) and a cylindrical tower keep (M25) of this same period. From the study of the debris of the smelters (slag), it became possible to distinguish the slag on the strength of its structure of the Bronze Age, Early Iron Age, and the medieval period. The Samad Culture was discovered in the cemetery Maysar-9 (redesignated Samad S10).

1981-82
Rising some 80m above the surrounding plain, the mountain fort at Lizq is one of Oman's most impressive prehistoric sites. It was originally the type-site for the Early Iron Age Lizq/Rumaylah Complex in Central Oman. Lizq was investigated and mapped by means of photogrammetrically rectified aerial photos, its long fortified staircase was partially conserved. A Wadi Suq and Samad Period cemetery at al Akhdar was reexcavated and mapped. In addition, numerous graves were excavated the Samad Period which owes its name to the oasis where its remains first were made. The hill fort al Maysar M34 was the first settlement of the Samad Culture which was excavated..

1983-84
The joint excavations of the Department of Antiquities and the German Mission centred on the sources of and production of copper in the prehistoric period on the island of Masirah. This expedition offered a first archaeological look at this island, 65 km long and maximally 17.5 km wide. Finds and sites documented here date to the second millennium (Wadi Suq), first millennium (Lizq/Rumaylah), and perhaps the Late Iron Age. One context is neolithic.

1985
The warrior grave N1985 of the late Wadi Suq Period, plundered when it was accidentally discovered in 1977, was investigated. Preparations were made for the publication of the Masirah project.

1986
It was possible to further document the find circumstances of the Early Iron Age hoard of artefacts accidentally uncovered in 1979 on the Daressalaam Farm in Ibri/Selme (see below).

1987-91
During this time span annual excavations took place in Samad al Shan and al Maysar. Graves were excavated and one house. The graves were located in several cemeteries which contained the graves of the Wadi Suq, Lizq/Rumaylah and Samad Periods. The project centred on the Samad Culture which initially was believed to represent the "Parthian, Hellenistic, and Sasanian populations". A largely early medieval population came to light ranging from the year 0 (or earlier) to 900 AD. 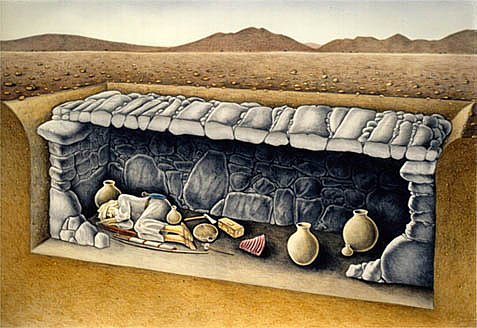 1991
Parallel to "Samad Project", tests were conducted at al Amqat and al Bustan for the Ministry. Samad graves were investigated al Amqat in the mountainous Sama`il Pass and in the drainage fan of al Bustan. On the strength of these two cemeteries and another at Bandar Jissa, the distribution of the Samad Culture became clearer. The graves at al Amqat and al Bustan were better preserved than at Samad/Maysar. Given the size of the sample excavated (five graves at al Amqat, eight at al Bustan) it is difficult to contrast the burial customs there with those of al Jawf, the heartland of the Samad Culture.

1995
This year's campaign "A Survey of Threatened Archaeological Monuments" had three emphases. First, known sites and new ones were visited in order to gauge their rate and degree of destruction. Second, we undertook to investigate, clean, and document the tower cemetery at Shir/Jaylah, a remote mountain site in the Sharqiyah. Third, further prospection took place in the North in the al Dhahirah province. With regard to the latter endeavour, we also were seeking the northern equivalent of the Samad Culture (>300 BC-900 AD) which till now was believed to be distributed exclusively in the eastern central part of the Sultanate.

A survey revealed several Pre-Islamic cemeteries and settlements which are the victim of stone robbing and other destructive activities. Owing to older damage, occasionally before construction work begins these monuments are hardly recognizeable even to experts. Large scale stone robbing continues and large areas have been cleared of the stones of a size desireable for building. At al Batin copper slag of the third millennium was further studied.
Map of Al Maysar - Cemeteries and Settlements Maysar North

Time allowed the cataloguing and mapping of the 59+ tower tombs at Shir/Jaylah. Three towers were cleaned and photogrammetrically documented. We partially restored tomb Shi1. The towers spread over an area of several square kilometres.

1996
In the late 1970's the German Archaeological Mission began fieldwork centring on Magan/Makkan. In the framework of the 3 year project "A Structuring of the Iron Age in Eastern Arabia" archaeological fieldwork began in 1996 in Central Oman and in that little-researched part of the Sultanate lying to the north. A first goal was to locate there an equivalent for the Samad Culture. Building on this prerequisite, a second goal was to elucidate the transition from the Early to the Late Iron Age. It was hoped that the reverse of the strategy originally used in the general chronology. If from 1987 to 1992 work centred on grave good and cemetery analysis, the excavations at Raki in northern Oman and al Maysar (M42 and M43) in Central Oman placed the accent on the chronology of the settlements and the pottery.

1997
The excavation of 1996 at Raki 2 continued for a final season. It was hoped that there a development could be traced from the Early to the Late Iron Age, also in terms of developments in the smelting technology. The excavation of a cemetery near Amlia sought the northern equivalent of the Samad Culture of Central Oman. The culture discovered was never before encountered in the Sultanate. The finds resemble those from sites in the United Arab Emirates.

Aside from Excavation
Other projects of the Mission include the restoration and cataloguing of a very large hoard of metal bowls, bangles, and daggers from Ibri/Selme which dates in principle to the Early Iron Age (in press). Smaller projects include the first publication of pottery from the excavation at Khor Rori, Dhofar. 1989 witnessed the reexcavation of the robbed collective tomb of a] Wasit "W1 " of late second millennium BC date, with its numerous bronze weapons. Especially between 1991 and 1995 mapping and publication continued. Jointly with Paolo Costa the excavation of the late Early Iron Age cemetery at Bawshar was prepared for publication. Several of these publication projects are in the press.
Several theses arose directly or indirectly from the work of the Mission. These include the habilitation of Paul Yule, Die Graeberfelder in Samad al Shan (Sultanat Oman): Materialien zu einer Kulturgeschichte (Heidelberg 1994). The dissertation of Burkhard Vogt, Zur Chronologie und Entwicklung der Graeber des spaeten 4. Bis 2. Jtsd. v. Chr. auf der Halbinsel Oman (Goettingen 1985), also was built on this foundation. This also holds for Juergen Schreiber's MA thesis, Zur Siedlungsarchitektur auf der Halbinsel Oman vom 3. Bis zur Mitte des 1. Jahrtausend v. Chr. (Munich 1995). A Diplomarbeit authored by Cordelia Roesch, is entitled Praeislamische Schmuckperlen aus dem Sultanat Oman - Mineralogisch-materialkundliche Untersuchungen (Wuerzburg 1994) deals with the origin of the Pre-Islamic beads in Central Oman.