Link to the email:
koegel@em.uni-frankfurt.de

Link to the lab page
http://www.neuroscience-center.uni-frankfurt.de/Institute/inst-exp-nchir/index.html

Link to the email:
cbehl@uni-mainz.de

Link to the lab page
http://www.unimedizin-mainz.de/pathobiochemie/forschung/ag-behl.html?L=1 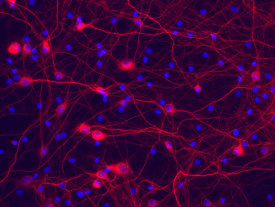 Under physiological conditions the majority of APP is processed by α-secretase leading to the generation of the large soluble N-terminal fragment sAPPα which has been implicated in a variety of cellular processes and supposed to mediate important physiological function. Previous studies from our labs suggest that sAPPα exerts potent neuroprotective effects via modulation of gene expression as well as by antagonizing oxidative and other types of neurotoxic stress, thereby inhibiting stress-triggered cell death. Moreover, we have shown that the biochemical processing of endogenous APP is down regulated during aging in human fibroblasts, resulting in a notably reduced secretion of the ectodomain.

Based on these observations the project aims at further elucidating the roles of sAPPα as well as other APP family members and cleavage products in neuroprotection by adressing the following questions: