Dept. of Bioinformatics and Functional Genomics

TP 1: The role of the amyloid precursor protein gene family in the adult central nervous system 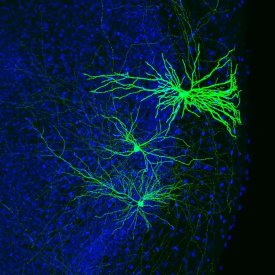 Despite biochemical and genetic evidence that put Aβ as a central trigger for AD pathogenesis, the physiological role of APP and the question of whether a loss of its functions contributes to AD are still unclear. Thus, it is essential to elucidate the in vivo function(s) of APP, of the related APLPs and their various proteolytic fragments.

We previously generated a series of knockout mice lacking individual APP family members mice that proved viable. In contrast APP/APLP2 double knockouts (DKO) and triple mutants lacking all three APP family members die shortly after birth due to defects in neuromuscular synaptic transmission. This suggests a central role for APP/APLPs in synapse formation and function. Indeed, we could show that the secreted ectodomain APPsα is crucial for synaptic plasticity in the hippocampus. To gain further insights into APP/APLP functions in the adult CNS and to circumvent perinatal lethality we are generating conditional double knockout mice (cDKO) by crossing mice with floxed APP (and APLP2) alleles with different Cre transgenic lines. These mice will be analyzed with regard to brain morphology, neuronal survival, synapse formation and function, and finally functional consequences for cognition, learning and memory. Adult neurogenesis has been implicated in certain forms of learning and memory, and may provide plasticity to the aging. Thus, it is important to unravel the contribution of defects in adult neurogenesis to pathogenesis and cognitive decline in AD. However, a systematic analysis of the role of endogenous APP/APLPs (and their cleavage products such as APPsα) as neurotrophic and neuroprotective molecules in adult neurogenesis is still lacking. To this end, we employ mice with genetically modified APP/APLP loci to unravel the role of APP family proteins for adult neurogenesis within the subventricular zone and the hippocampus.