Link to the email:
andreas.draguhn@physiologie.uni-heidelberg.de

Link to the lab page
http://www.medizinische-fakultaet-hd.uni-heidelberg.de/Physiologie-und-Pathophysiologie.102672.0.htmlttp:

Link to the email:
m.korte@tu-bs.de

Link to the lab page
http://www.zoologie.tu-bs.de/

TP 6: Alterations of synaptic and network functions in APP and APLP-deficient mice 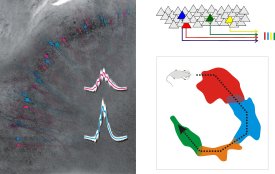 The groups of Andreas Draguhn and Martin Korte want to elucidate the role of APP (and its fragments) and APLP2 for their physiological functions in the mouse hippocampus. It has been established long ago that the dramatic loss of synapses in Alzheimer´s disease (AD) correlates highly with disease severity. Later studies revealed massive changes in synaptic function, especially at early stages of AD, prompting the classification of the disease as "synaptic failure". This is in line with the suggested role of APP and its fragments in synaptic plasticity and Ca2+ homeostasis. Our knowledge about the function of APP is, however, mostly derived from pathology, including animal models of familial AD. The role of APP and the related proteins APLP1 and APLP2 in normal synaptic transmission, synaptic plasticity and neuronal network behavior remains largely obscure.

Therefore, groups of Draguhn and Korte combine their complementary expertise to study genetically modified animals and cells, provided by U. Müller. We hypothesize that deficiency in APP or APLP causes changes in baseline synaptic properties, excitation-inhibition-balance, short- and long-term synaptic plasticity and, as a consequence, in different patterns of memory-related network activity. Cells from the lethal APP/APLP2-DKO double mutants will be analyzed in hippocampal cell cultures. The expected alterations of inhibitory and excitatory synaptic currents will serve as a baseline for further experiments on brain slices, using currently developed conditional APP/APLP2 knockout lines that will allow to assess functions in the adult CNS. Abnormalities in these mice will shed light on the (overlapping) function of APP and APLP2. Finally, ES cells deficient for APP family members will be differentiated into neurons and will be studied after transplantation into organotypic hippocampal slice cultures. Together, our data shall reveal the functional importance of the APP/APLP protein family at the cellular and network level.