Quantum Physics – Hot and Cold at the Same Time 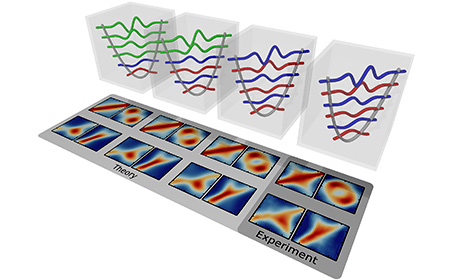 A classical gas is either cold (blue) or hot (red). Certain quantum systems, however, can exhibit several temperatures at once. A comparison of the correlation diagrams shows that the predictions match the measurements only for a select range of widely varying temperatures.

A cloud of quantum particles can have several temperatures at once, as demonstrated in experiments conducted in a joint project by researchers from Heidelberg University and the Vienna University of Technology (Austria). The results of the study help scientists to better reconcile the laws of quantum physics with statistical descriptions. “This is relevant for our understanding of many quantum systems and sheds new light on how our everyday world, with its ‘classical’ statistical characteristics like temperature, emerges from the quantum world,” says Prof. Dr. Thomas Gasenzer, a physicist who teaches and conducts research at Ruperto Carola. The results of the research work have now been published in the journal “Science”. 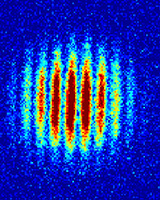 A typical matter wave pattern, created by the interference of atomic waves

The air around us consists of countless molecules, racing about randomly. It would be utterly impossible to track them all and to describe all their trajectories. But for many applications, such an endeavour is not necessary because properties can be found which statistically describe the collective behaviour of all the molecules, such as the temperature which results from the particles’ speed. According to Prof. Gasenzer, temperature is an extraordinarily useful physical quantity as it allows us to make a simple statistical statement about the energy of a highly complicated tangle of swirling particles. The scientists in Heidelberg and Vienna have now investigated how quantum particles reach a state where they can be statistically described. To this end, Prof. Gasenzer collaborated with the team of Prof. Dr. Jörg Schmiedmayer from the Vienna University of Technology’s Institute of Atomic and Subatomic Physics.

Prof. Gasenzer stresses that the statistical view has proved to be extraordinarily successful. It describes many different physical processes, from water boiling in a pot to phase transitions in liquid crystals, which are used in flat screens. In spite of vast research effort, however, this view still leaves many questions unanswered, especially with regard to quantum systems. How the well-known laws of statistical physics – and with them our “classical” world – emerge from many quantum mechanical parts remains one of the big open questions in physics. In their research, the Heidelberg and Viennese scientists have now succeeded in precisely observing processes in a quantum multi-particle system in experiments in order to improve their understanding of the emergence of statistical properties. The researchers used a special kind of microchip to capture clouds of several thousand atoms and cooled them down to temperatures near absolute zero at -273°C, where their quantum properties become visible.

The experiments produced remarkable results: When the external conditions on the chip are changed abruptly, the quantum gas attempts to achieve a state of equilibrium that can be described by a statistical model of multiple temperatures. The gas can thus be hot and cold at the same time. The number of temperatures depended on how the scientists manipulated the gases. According to Dr. Tim Langen, leading scientist of the study at the Institute of Atomic and Subatomic Physics, the microchips can be used to control these complex quantum systems quite well and to investigate their behaviour. This is especially important, in his view, as there had already been theoretical calculations predicting this effect, but it had never been possible to observe it and produce it in a controlled environment.

In conjunction with the experiments in Vienna, comprehensive numerical calculations were performed at Heidelberg University. The researchers calculated the quantum dynamics of the gases in order to prove the validity of the theoretical predictions and to interpret the measured data correctly. “In particular, one crucial prerequisite is the ability to measure the complex interrelations between measured values at different positions in the system directly,” says Heidelberg physicist Sebastian Erne, who developed the numerical algorithms for comparing the experimental data with the theory. Using high-performance computers, he was able to demonstrate that the measured correlations determine the predicted special statistical properties. “The gas therefore has to be understood as both hot and cold at the same time for the experimental observations to be inherently conclusive and to comply with the established laws of quantum physics as well as the statistical description,“ stresses Prof. Gasenzer.