A digital portrait photo of Prof. Wienhard is available from the press office. 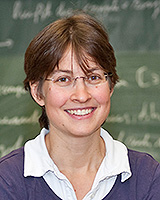 Heidelberg mathematician Prof. Dr. Anna Wienhard is the recipient of an ERC Consolidator Grant, a highly endowed grant for outstanding research talents given by the European Research Council (ERC). The funds will be used to pursue her work in symmetries and moduli spaces of geometric structures over a period of five years. Anna Wienhard, professor and researcher at the Mathematical Institute of Heidelberg University, will receive nearly 1.6 million euros to support her “Deformation Spaces of Geometric Structures” project.

As Prof. Wienhard explains, symmetries play a major role not only in mathematics, but in physics, biology and chemistry as well. Symmetries can be expressed mathematically in terms of a group of transformations that preserve a given geometrical structure. “Structures with a lot of symmetries are often rigid, because even small changes can break the symmetry,” explains the Heidelberg mathematician. “But there are structures that can be changed, or deformed, without breaking the symmetry. In these cases, the geometric structure allows for an interesting moduli or deformation space.”

One example of this kind of structure is the tiling of the Euclidean plane by squares. This geometrical structure can be changed, or deformed, to a tiling by parallelograms. This deformation preserves the symmetry. “In our project we want to study the deformation spaces of geometric structures on more complicated mathematical objects. So-called higher Teichmüller spaces, discovered within the last twenty years, play a special role in this process. They have led to interesting developments in mathematics and are also relevant in theoretical high-energy physics,” says Prof. Wienhard.

Anna Wienhard (b. 1977) studied theology and mathematics at the University of Bonn. After receiving her dual degrees, she initially embarked on theological research funded by the “Judaism – Christianity” Collaborative Research Centre before earning her doctorate in mathematics in Bonn in 2004. She then pursued research in Switzerland and the USA, including at the Institute for Advanced Study in Princeton. From 2007 on she was an Assistant Professor at Princeton University. In 2012 she joined Heidelberg University as a professor of “Pure Mathematics” at the Mathematical Institute. She leads the research group in differential geometry there. Her research has won Prof. Wienhard a number of awards and grants.

The ERC Consolidator Grant is aimed at young researchers who have already demonstrated considerable promise and have now submitted an outstanding research proposal. Scientific excellence is the main criterion for funding.