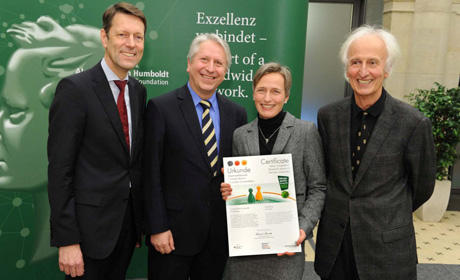 In October 2011, Heidelberg University introduced the new Research-Alumni Network for current and former visiting scientists. The project, which won an award from the Alexander von Humboldt Foundation, offers a special range of services to international scholars that are conducting, or have conducted, research in Heidelberg.

As part of the central alumni initiative Heidelberg Alumni International (HAI), the new network targets international PhD students, postdocs and established scientists. The university wants to support these visiting scientists with customised services and integrate them in university activities during their stay in Heidelberg and beyond.

The HAI services are provided in cooperation with the Welcome Centre and the International Relations Office of Heidelberg University, the university's centres and branch offices in Chile, India and the USA, and the worldwide alumni networks. During their stay in Heidelberg, international scientists can use the services offered by the HAI and the Welcome Centre, as well as services within the research network that are tailored to their special requirements. After the end of their stay, Research-Alumni are invited to attend international network meetings for Heidelberg visiting scientists in countries around the globe. HAI also supports short-term academic stays of former visiting scientists in Heidelberg. These visits organised via the network allow researchers from all over the world to return to Heidelberg in order to renew professional contacts, inform students, scientists and other interested parties about their research, and establish or intensify scientific cooperation projects. They also provide the university with the opportunity of training the Research-Alumni as international ambassadors of Ruperto Carola.

With India, Italy and the United States, the new network is currently focusing on countries with which Heidelberg University already maintains numerous research contacts. However, the network is open to visiting scientists from all over the world; the current 140 members of the network hail from 20 countries on four continents. The first Research-Alumni Meeting took place in March 2012 in New Delhi, India; additional meetings are planned in September 2012 in Boston, USA and in February 2013 in Italy.