Registration for the HAI network 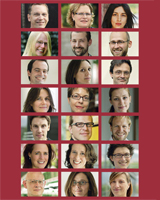 UniverCity: Universität Heidelberg. The Future. Since 1386.

In October 2011, Heidelberg University introduced the new Research-Alumni Network for current and former visiting scientists. The project, which won an award from the Alexander von Humboldt Foundation, offers a special range of services to international scholars that are conducting, or have conducted, research in Heidelberg. [More...]

As part of the services for members of the Research-Alumni Network, Heidelberg University has created a dedicated group in HAInet – the global online community of the university's alumni. In HAInet, alumni can find former fellow students in the international alumni directory, establish valuable contacts in the worldwide HAIsociety and find information on professional opportunities at home and abroad. [More...]

Heidelberg University invites its current and former visiting scientists to international network meetings within the framework of the Research-Alumni Network. The first of these meetings took place in March of 2012 in New Delhi, India; additional meetings are scheduled for September 2012 and the spring of 2013 in the United States and Italy. [More...]

"I Lost My Heart in Heidelberg"

The Research-Alumni Network lives by and with its members – visiting scientists that are currently conducting research in Heidelberg or have already concluded their stay and are continuing their work elsewhere. We will introduce three of these scientists in each edition of this newsletter. In this edition:

As an Excellence university and the oldest German institution of higher education, Heidelberg University stands for both innovation and tradition, a combination that has proved highly attractive to international scientists. Although the university is not among the largest in Germany, it is the most popular among foreign PhD students and is generally regarded as the place to go for researchers from abroad. [More...]

Heidelberg University Is Again Successful in the German Excellence Initiative

Ruperto Carola is one of eleven German universities whose institutional strategies were successful in the second funding round of the German Excellence Initiative, allowing them to claim the title of an "elite university". After its success in the first funding phase, Heidelberg is one of only six universities whose institutional strategy gained a positive evaluation and whose renewal application was also successful. [More...]

In 2006 and 2007, Heidelberg University founded two clusters of excellence and three graduate schools within the framework of the German Excellence Initiative, with the aim of promoting top-level research and supporting junior scientists. Outfitted with state-of-the-art equipment, these institutions offer outstanding PhD students and established scientists from all over the world excellent research conditions in highly interdisciplinary projects and research networks. [More...]