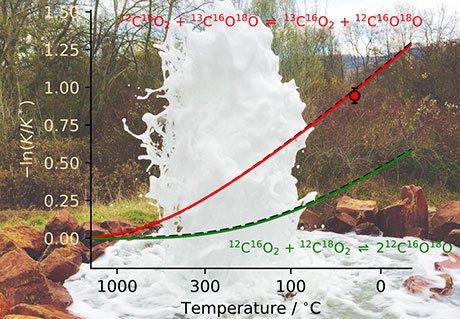 Temperature-dependent change of the CO2 isotope distribution: At low temperatures, a molecule with rare isotopes occurs much more frequently. The photo shows the escape of CO2 from a hydrothermal system, the Andernach geyser.

For the first time it is possible to measure, simultaneously and with extreme precision, four rare molecular variants of carbon dioxide (CO2) using a novel laser instrument. It is thus able to measure the temperature during the formation of CO2-binding carbonates and carbonaceous fossils completely independently of other parameters. As a new type of geothermometer, the laser-spectroscopy-based measurement device is significant for scientific disciplines investigating, for example, climatic conditions in Earth’s history. It was developed by a German-French research team, with substantial contributions from environmental physicists at Heidelberg University.

Science is studying the distribution of atomic building blocks of carbon dioxide to develop a better understanding of key geochemical and biogeochemical cycles as well as climatic processes on our planet. Knowledge about glacial cold and interglacial warm phases in Earth’s history is largely based on this methodology. The analysis of the isotopic distribution of carbon dioxide is also used for carbonates in which CO2 is mineralised. A new approach involves examining the isotopic distribution between different variants of the same molecule, especially rare molecular variants.

Only in recent years has it become possible to measure the atomic composition of CO2 and carbonate using high-precision mass spectroscopy, such that the formation temperature of the carbonate can be directly inferred from the relative abundance at which multiple variants of a molecule occur. In thermodynamic equilibrium, the distribution of isotopes between the different variants depends solely on temperature and is not influenced by other parameters. “This method has therefore proven to be a particularly robust and unique physical thermometer in geophysics and climatic research,” states Dr Tobias Kluge, who studies the physics of isotopologues at Heidelberg University’s Institute of Environmental Physics.

To quantify the rare CO2 variants with utmost precision – greater than 1 in 20,000 – the German-French team used an infrared laser for the first time, which Dr Kluge characterises as a fundamental technical breakthrough. In a pilot study of different hydrothermal systems of the Upper Rhine Trench, the scientists used their new laser instrument to determine, on the basis of CO2, temperatures generally corresponding to those of the local groundwater. “The measured temperatures were also consistent with the results of simultaneous mass spectrometric analyses,” explains the study's primary author Ivan Prokhorov, who earned his doctorate at the Heidelberg Graduate School of Fundamental Physics at Ruperto Carola and is now with the National Metrology Institute of Germany (PTB) in Braunschweig.

According to Dr Christof Janssen of the French National Centre for Scientific Research (CNRS) in Paris, this technological advance could soon surpass the precision of mass spectrometry as well as drastically shorten measurement times. It should also support field measurements in the future. One particular advantage of the laser instrument is its direct access to the temperature variable, explains Dr Kluge. Just by comparing how often the molecular variants investigated occur, the temperature of CO2 can be unequivocally determined, whereas mass spectrometry always requires calibrations and regular standard measurements. “We are already looking towards the future and working on developing ways to measure even rarer and so far inaccessible isotope variants, enabling quantitative measurement of even more complex biogeochemical processes,” adds the Heidelberg researcher.

The results of their research were published in “Scientific Reports”. The work was funded by the Heidelberg Graduate School of Fundamental Physics (HGSFP).