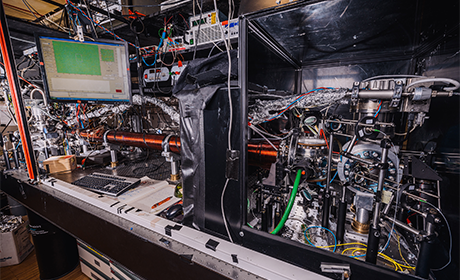 A Heidelberg physics project funded by the German Research Foundation (DFG) will focus on a new type of dating method for use in the earth and environmental sciences. The research team will deploy a special radioactive isotope of the noble gas argon (Ar) for the purpose of water dating. This isotope is useful for determining age in the range of 50 to 1,000 years. Prof. Dr Markus Oberthaler of the Kirchhoff Institute for Physics and Prof. Dr Werner Aeschbach of the Institute of Environmental Physics of Heidelberg University will direct the three-year project. The DFG has approved funding in the amount of approximately one million euros. Research is dated to begin in March 2017.

The project, “ArTTA-10mL: An instrument for 39Ar-dating of small ice and water samples”, was selected for funding from the DFG's first-time call for bids for "New Instrumentation for Research." The work is a continuation of a long-standing collaboration between the working groups of Prof. Oberthaler and Prof. Aeschbach, who have already successfully used the dating method based on the noble gas radioisotope 39Ar and developed a prototype measurement device. The Heidelberg researchers intend to design the new, one-of-a-kind instrument for routine use on small samples and then make it available to other researchers.

Dating in the earth and environmental sciences is largely based on radioactive isotopes whose gradual decay provides time information. Because it is the only isotope that covers the important age range of 50 to 1,000 years, the noble gas radioisotope 39Ar is highly interesting for dating in ground water research, oceanography and glacier research. The fact that it is extremely rare makes the work very challenging. Measurements in the 1960s showed only a single 39Ar atom in one quadrillion argon atoms in air. Dating ground or ocean water by detecting the radioactive decay of 39Ar requires samples of at least one ton water.

The Heidelberg measurement process is based on the fundamentally new method of Atom Trap Trace Analysis (ATTA), wherein 39Ar atoms are captured and detected in an atom trap. This technology for "manipulating" atoms was perfected in Heidelberg in recent years. It makes it possible to reduce the required sample size by a factor of 100 to 1,000, according to Prof. Oberthaler. In a preceding project, the researchers were able to demonstrate that measuring 39Ar is possible in principle using this procedure. Now, using ocean water and Alpine ice, they have provided evidence that the 39Ar ATTA measurement can also be realised using small samples of only 25 litres of water or an argon volume of ten millilitres or less. "That opens up completely new application horizons. The need for such analyses is great, especially in the field of tracer oceanography," explains Prof. Aeschbach.

Markus Oberthaler conducts research at the Kirchhoff Institute for Physics, Werner Aeschbach at the Institute of Environmental Physics. Prof. Aeschbach is also Director of the Heidelberg Center for the Environment (HCE).