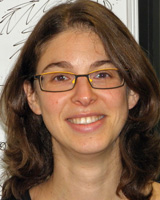 Molecular biologist Dr. Ayala Shiber has been awarded a fellowship from the Alexander von Humboldt Foundation to pursue her research in Heidelberg. In February 2016 the Israeli native will join the Center for Molecular Biology of Heidelberg University (ZMBH) as a postdoctoral fellow for a period of two years. During that time she will be a member of the research group led by Prof. Dr. Bernd Bukau exploring mechanisms of folding and assembly of newly synthesised proteins.

Ayala Shiber (b. 1979) studied biotechnology and genetics at Ben-Gurion University of the Negev in Beersheba (Israel). She went on to study chemistry and molecular biology at the Hebrew University of Jerusalem, where she earned her doctorate in 2014. The Humboldt Research Fellowship will allow her to continue her research into protein complexes and their formation from multi-molecular complexes in cells. She is studying the possibility that their components already assemble during ribosome synthesis to ensure efficient complex formation.

Postdoctoral research grants from the Alexander von Humboldt Foundation enable outstanding foreign scientists to conduct research in Germany for a longer term. In cooperation with a research host, the grant recipient can pursue an independent research project.