On both days, the lectures entitled “Bertalanffy Lecture at COS” will take place at the Centre for Organismal Studies, Im Neuenheimer Feld 230, Ludwig von Bertalanffy Lecture Hall at 2 pm. Representatives of the media are cordially invited to attend and report.

Bertalanffy Lecture Series at COS

Bertalanffy Lecture for Laypersons and Experts on Cancer Stem Cells

Press Release No. 171/2014
15 September 2014
Andreas Trumpp offers insight into his current research work at the DKFZ 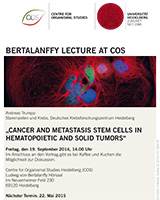 Poster for the Bertalanffy Lecture as a pdf-file

The topic of cancer stem cells is one of the main research areas of Prof. Dr. Andreas Trumpp at the German Cancer Research Center (DKFZ) in Heidelberg. The scientist will give two lectures at Heidelberg University presenting his findings on the mechanism of stem cell self-renewal and the role of cancer stem cells in tumour and metastasis formation. Prof. Trumpp is the guest speaker of the “Bertalanffy Lecture at COS”, organised by the Centre for Organismal Studies (COS) and taking place on 18 and 19 September 2014. The lecture series sponsored by the Klaus Tschira Foundation is angled not only at experts in the field, it is also designed to reach out and communicate the frequently complex issues and research results to laypersons, notably pupils. The Bertalanffy Lecture thus provides a forum for the exchange between youngsters and scientists from various disciplines.

Prof. Trumpp explains that just like their healthy counterparts, cancer stem cells can renew themselves in an unlimited manner, which makes them immortal and therefore so dangerous to the organism. They are often not only the cause of cancerous disease, but also in many cases responsible for tumour recurrence and metastasis. According to the Heidelberg scientist, radiation and chemotherapy have little or no effect on cancer stem cells, because they can enter a reversible deep dormant state. The surviving cancer stem cells are then able to regenerate a tumour or metastases even after an initially successful treatment of the original tumour. One of the researcher’s most important goals is to identify these often rare cancer stem cells and develop tools to target them for destruction. Andreas Trumpp heads the Stem Cells and Cancer Division at the German Cancer Research Center and is Director of the Heidelberg Institute for Stem Cell Technology and Experimental Medicine (HI-STEM gGmbH).

His lecture “Cancer Stem Cells“ on 18 September is aimed at pupils in the last years of grammar school. Afterwards Prof. Trumpp and researchers from the Centre for Organismal Studies will join attendees for discussion in small groups. The event on 19 September is focused on the topic “Cancer and Metastasis Stem Cells in Hematopoietic and Solid Tumors“ and is reserved for scientists of the Heidelberg research hub. There will also be plenty of opportunity for discussion and knowledge exchange after the lecture.

Heidelberg University’s Centre for Organismal Studies is an interdisciplinary institution of zoology and plant sciences. The lecture series, begun in October 2012, is held in remembrance of Ludwig von Bertalanffy (1901-1972), a significant 20th century theoretical biologist and systems theorist. The next “Bertalanffy Lecture at COS” is scheduled for 7 and 8 May 2015, when the guest speaker will be Prof. Dr. Martin Wikelski, Director at the Max Planck Institute for Ornithology and head of the Department of Migration and Immuno-Ecology.

The Klaus Tschira Foundation supports the sciences, mathematics and computer science in research and teaching and is dedicated to enhancing the regard in which these subjects are held. The Foundation is active all over Germany from kindergarten and primary school level all the way up to universities and research institutions. The Foundation promotes innovative methods of communicating scientific facts.