A digital portrait photo of the prize recipient can be obtained from the Press Office. 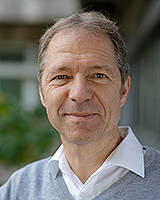 The recipient of the Lautenschläger Research Prize, endowed with 250,000 euros, is Prof. Dr. Ralf Bartenschlager of the Heidelberg Medical Faculty of Heidelberg University, a virologist at Heidelberg University Hospital. This honour is being bestowed on an “internationally recognised research personality who is the embodiment of outstanding achievement in research,” explains Dr. h.c. Manfred Lautenschläger, the donor of the prize and honorary senator of Heidelberg University. Prof. Bartenschlager's work delves into the molecular biology of the hepatitis C virus and makes groundbreaking inroads in this area of research. The award ceremony for the most highly endowed research prize from a private donor in Germany will be held on 6 December 2013 at Heidelberg University. The award ceremony will include a “Science Talk” with the participation of Prof. Dr. Harald zur Hausen, Heidelberg medical scientist and Nobel Prize laureate.

The Lautenschläger Research Prize is awarded every two years for special accomplishments in leading-edge research. The distinction is aimed at scientists and scholars working at Heidelberg University as well as other researchers from Germany and abroad with an especially remarkable record of collaboration with the university. Entrepreneur Manfred Lautenschläger established the award in 2001 to support the work of outstanding academics actively engaged in innovative research. An interdisciplinary awards committee, comprising of internationally affiliated scientists and scholars, selects the prize receivers. Candidates from all research disciplines can be nominated for the Lautenschläger Research Prize.

Ralf Bartenschlager (born in 1958) studied biology at Heidelberg University, where he also earned his doctorate in 1990. As a postdoc, he initially worked at the Centre for Molecular Biology of Heidelberg University before working in industrial research from 1991 to 1993. He joined the University of Mainz as a research assistant in 1994 to pursue basic research at the Institute of Virology there as well as lead an independent research group. He completed his habilitation in Mainz in 1999 and in 2001 was appointed a professor of molecular virology. In 2002 the researcher was appointed to the Heidelberg Faculty of Medicine as a professor endowed by the Chica and Heinz Schaller Foundation. At Heidelberg University Hospital, Ralf Bartenschlager is the Director of Molecular Virology of the Department of Infectious Diseases. He also conducts his research, which earned him several significant awards, in the framework of the “CellNetworks” Cluster of Excellence at Heidelberg University.

The challenge Prof. Bartenschlager faced in his research was that the hepatitis C virus does not multiply in cell cultures, thereby eluding molecular analysis of virus reproduction for quite some time. The Heidelberg researcher was the first to develop a reproducible cell culture system on the basis of a so-called minigenome and later established a complete reproduction system for this virus in cell culture. As the awards committee notes, he earned the award because his discoveries took this area of research in a completely new direction, laying the foundation for the development of antiviral therapies and vaccines. “Excellent research results as well as participation in national and international expert boards had already earned him the highest level of recognition in the past.” With the receipt of this award, Ralf Bartenschlager is also being honoured for his commitment to the training of excellent young researchers.

Prof. Dr. Bernhard Eitel, Rector of Heidelberg University, will commence the award ceremony with a welcome speech, followed by a talk from developmental biologist Prof. Dr. Joachim Wittbrodt, recipient of the 2011 Lautenschläger Research Prize. Afterwards Dr. h.c. Manfred Lautenschläger will officially present the prize. During the “Science Talk”, prize winner Prof. Dr. Ralf Bartenschlager, medical scientist and Nobel Prize laureate Prof. Dr. Harald zur Hausen and Prof. Dr. Klaus Heeg, Director of Medical Microbiology and Hygiene of the Department of Infectious Diseases, will address questions from Jan-Martin Wiarda, Head of Communications and Media Relations of the Helmholtz Association. The donor of the prize will then address the audience. The Lautenschläger Research Prize of Heidelberg University will be awarded on Friday, 6 December 2013, in the Great Hall of the Old University. The ceremony will begin at 4pm.