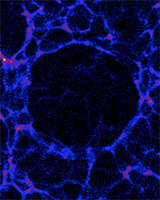 Hubble Bubble simulation: Our home galaxy would lie in the centre of the marked empty bubble. The Hubble Bubble's very large size, however, makes the Milky Way unrecognizable. The matter at the edge of the bubble attracts our neighbouring galaxies, causing them to accelerate.

The existence of the "Hubble Bubble" may explain, at least in part, the differing measurements for the expansion and therefore the age of the universe. That is the assumption of a team of physicists headed by Prof. Dr. Luca Amendola from the Institute for Theoretical Physics at Heidelberg University. In collaboration with colleagues from the Netherlands, the Heidelberg physicists developed a theoretical model that places the Milky Way inside of this type of cosmic bubble. The researchers believe the bubble can explain some of the deviations between previous measurements and the latest ones from the Planck satellite of the European Space Agency (ESA). The results of their research were published in the journal “Physical Review Letters”.

The observable universe has been expanding since the Big Bang. It still is, causing galaxies in our Milky Way to recede. The actual speed of this expansion is known as the Hubble constant. Due to its importance in calculating basic properties of the universe, such as its age, modern cosmology is tasked with determining the value of the constant. There are two conventional methods used, although their results are not congruent, according to Dr. Valerio Marra from Heidelberg University’s Institute for Theoretical Physics. “This has been the source of intense, long-standing debate in the scientific community.”

One way to determine the Hubble constant, and hence the universe's rate of expansion, is based on measuring the cosmic microwave background radiation in space. It was released approximately 400,000 years after the Big Bang and pervades the entire universe. Several months ago the Planck satellite from the ESA delivered measurements of this ancient radiation. The Hubble constant, however, can also be derived from the movement of galaxies near the Milky Way, movement largely due to the expansion of the universe. “When you compare the results from the two methods, there is a deviation of about 9 percent”, explains Dr. Marra.

In their search to explain the difference in data, the Heidelberg team thought that the reason was not some previously unrecognized error in measurement, but based on a physical effect. According to Dr. Marra, the existence of the Hubble Bubble could be the cause. The bubble describes regions of the universe where the density of matter falls below the cosmic average. “Until now knowledge of our cosmic neighbourhood has been too imprecise to determine whether or not we are in such a bubble”, continues Dr. Marra. “But let's just assume for a moment that our Milky Way is located in a Hubble Bubble. Matter outside the bubble would then attract nearby galaxies so strongly that they would move more quickly than average. In this case we would measure a higher Hubble constant that would apply to our cosmic neighbourhood, but not to the universe as a whole.” Dr. Marra believes that this could partly explain the conflicting measurement results. The Hubble constant measured by the Planck satellite would represent a spatial average applicable to the entire universe. The Hubble constant determined through the movement of galaxies, however, would be valid only in the vicinity of the Milky Way. “Anyone expecting the measurements from our cosmic environs to match those of the microwave radiation implicitly assumes that we live in a typical region of the cosmos. But that isn't necessarily true”, continues Prof. Amendola, whose working group has been studying the expansion of the universe for many years.

Using their research approach, the scientists have thus far been able to account for approximately one-fourth of the deviation between the two Hubble constants. Dr. Marra and his colleagues expect a detailed analysis will reduce the discrepancy even more. “Until now we have been working with a spherical Hubble Bubble. But it's far more likely that the bubble is asymmetrical, which would explain the deviating measurements even better”, observes Dr. Ignacy Sawicki, also a researcher at the Institute for Theoretical Physics. “If the difference in data should manifest itself instead, this would be a major indicator that our former natural scientific view of the cosmos is still missing an ingredient”, stresses Dr. Sawicki.

In addition to Valerio Marra and Ignacy Sawicki, Dr. Wessel Valkenburg from the Instituut-Lorentz of Leiden University was also member of Prof. Amendola's team. Their work was funded by the Collaborative Research Centre/Transregio "The Dark Universe”.