From the Indian Valentine’s Day Card to the Arab Superman 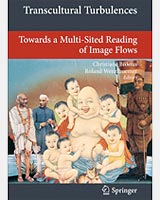 „Transcultural Turbulences – Towards a Multi-Sited Reading of Image Flows“

A new anthology from the Cluster of Excellence „Asia and Europe in a Global Context“ of Heidelberg University explores the exchange and flow of images between cultures. Using specific phenomena from e.g. everyday life, the media, or religion, these processes of exchange and dissemination are documented and examined for their meaning. The publication by Prof. Dr. Christiane Brosius and associate professor Dr. Roland Wenzlhuemer entitled “Transcultural Turbulences – Towards a Multi-Sited Reading of Image Flows” is at the same time the first volume of a new series of books from the Cluster presenting the results of transcultural research.

“Images and media play a key role in cultural exchange processes and in transcultural contact zones. Until now, however, their research within the humanities has held only a marginal position”, points out Christiane Brosius, Professor of Visual and Media Anthropology of the Cluster of Excellence “Asia and Europe”. The newly released work contains eleven contributions from the Cluster’s first annual conference, organised by Christiane Brosius and her Heidelberg colleague, historian Roland Wenzlhuemer, at Ruperto Carola in 2009.  The book focuses on visual cosmopolitanism and the flow of images across cultural boundaries.

In her article, Christiane Brosius explains how the originally Anglo-American concept of Valentine’s Day spread throughout India and how Valentine’s Day cards awaken feelings of romantic love in urban youth there, but at the same time harbour the potential for conflict. Dr. Susanne Enderwitz, Professor for Islamic Studies, explores the Arabic superhero comic strip, “The 99”. She shows that these cartoon strips, inspired by the American “Superman”, were carried over into locale-specific contexts and how they have started to influence superhero comics in other countries. Sun Liying’s research is on nude images introduced in China in the 1920s. The doctoral candidate from the Cluster of Excellence describes how these photographs made their way from Europe into Chinese newspapers, even though erotic images were taboo in China at the time.

Illustrated in colour, the book was published by Springer and introduces the new series entitled “Transcultural Research. Heidelberg Studies on Asia and Europe in a Global Context”. It gives researchers from the Cluster as well as other institutions the opportunity to present the results of their research to a broad specialised public. Editors of the series are the three directors of the Cluster of Exellence “Asia and Europe”, Prof. Dr. Madeleine Herren-Oesch, Prof. Dr. Rudolf G. Wagner and Prof. Dr. Axel Michaels. For more information, go to www.asia-europe.uni-heidelberg.de.