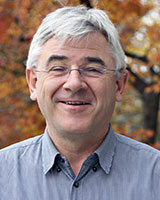 The European Research Council (ERC) has awarded a highly endowed grant – an ERC Advanced Grant for leading researchers in Europe – to experimental pathologist Prof. Dr Hellmut Augustin. The funding is earmarked for a five-year research project in which the vascular researcher and his team will study the "maturation" and organ-specific differentiation of blood vessels. The ERC grant is in excess of 2.3 million euros. Prof. Augustin is one of the two founding directors of the European Center for Angioscience (ECAS) of the Medical Faculty Mannheim at Heidelberg University. He also directs a research division at the German Cancer Research Center (DKFZ).

Augustin's "Mechanisms of vascular maturation and quiescence during development, homeostasis and aging" (AngioMature) project focuses on endothelial cells, long-lived cells that line the inside of all blood vessels. When passing into adulthood, they enter a resting state. "The maintenance of a quiescent and organically differentiated layer of endothelial cells within blood vessels is vital for human health," explains Prof. Augustin. Excessive or dysregulated activation of endothelial cells may lead to life-threatening diseases – including sepsis, atherosclerosis and cancer, he adds. The aim of the project is to investigate the largely unknown mechanisms of vascular maturation and organ-specific differentiation of endothelial cells at various stages of development – during vascular development, in adult homeostasis and during aging.

Hellmut Augustin (born 1959) studied veterinary medicine at the University of Veterinary Medicine Hannover, graduating with a DVM doctorate in 1987. He earned a PhD at Cornell University in Ithaca, NY (USA), from where he moved to the University of Göttingen in 1992 to complete Habilitation in Molecular Cell Biology in 1997. Starting in 2001, he worked as Department Head at the Tumor Biology Center Freiburg. He joined Ruperto Carola in 2006. He directs the Department of Vascular Biology and Tumor Angiogenesis at the Medical Faculty Mannheim of Heidelberg University and also heads the Division of Vascular Oncology and Metastasis at the German Cancer Research Center.