Kenyan Scientist to Do Malaria Research in Heidelberg 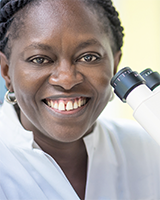 Thanks to the Sofja Kovalevskaja Award of the Alexander von Humboldt Foundation Dr Faith H. A. Osier, a scientist from Kenya, is going to do her research on malaria in Heidelberg. She is planning a project in Medical Microbiology, which will take up current issues of malaria research. The focus is on the natural immunity which some people show against malaria. Dr Osier is conducting a large-scale study with test-persons in seven African countries. She wants to gain a better understanding of the fundamental mechanisms and to use them for vaccination. Her academic host is Prof. Dr Michael Lanzer of the Centre for Infectious Diseases at the Heidelberg University Hospital.

Faith H. A. Osier was born in Kenya in 1972 and studied Medicine in Nairobi. Then she worked for a few years in hospitals in Mombasa and Kilifi (Kenya), before going to Britain in 2004. Faith Osier did her Master’s at the University of Liverpool and her PhD in Biology at the Open University in 2008. As a post-doctoral student and paediatrician she worked in Oxford and in then in Kilifi again. Since 2010 she has been employed as a clinical research fellow. In addition, she spent 2011 to 2013 as a visiting research fellow at the Burnet Institute for Medical Research in Melbourne (Australia).

The Sofja Kovalevskaja Award dates back to 2002; the Humboldt Foundation has recognised international research talent annually since 2014.  With prize money of up to EUR 1.65 million each time, the young scientists receive funding for innovative projects early in their career. They do research for up to five years at German universities and research institutions, and form their own research group at their host institutes. The award is financed by the German Federal Ministry of Education and Research. The Humboldt Foundation announced the winners at the end of July. The award ceremony will be held in Berlin in mid-November 2016.