Thanks to the large group of volunteer docents, the museum is open to visitors nearly every day. The team is happy to answer questions about the museum and university and can show visitors the Great Hall.

For those who like to have a tour of the permanent exhibit, the Great Hall and the student prison accompanied by texts and music, audio guides in German or English are available for a deposit at the museum entrance.

About the University Museum 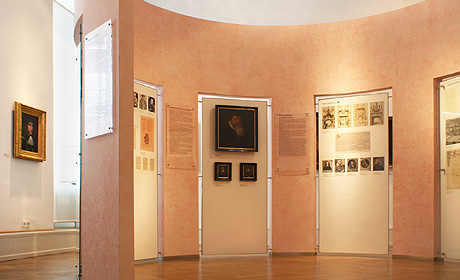 The University Museum, located since 1996 in the Old University building, showcases the development, wealth and diversity of Heidelberg University over the centuries. The premises could not be more appropriate. While the museum is housed on the ground floor of the 1712 baroque edifice, the Great Hall is located on the floor above and the historic student prison in the adjoining building – both of which bear witness to the history of the university and its rich tradition.

The history of Heidelberg University is featured in three rooms. With original documents and reproductions from the University Archives and the Palatinate Museum, room A offers an overview of the period from the institution's founding in 1386 until the end of the Holy Roman Empire in 1802.

The second room is devoted to the 19th century, a period characterised by Heidelberg Romanticism and the fierce debates leading up to the revolution of 1848/49. The 1850s launched the differentiation of the natural sciences and medicine. Portraits and reproductions depicting contemporary student rooms and protest marches, early photographs of laboratory buildings and apparatuses developed by Hermann Helmholtz paint a picture of a time in which much groundwork was laid for modern life as we know it.

Room C highlights the role of the university as the Weimar Republic endeavoured to establish a democratic society, during the national socialist dictatorship, and as the country again strove for democracy after World War II. The effects of rapid student growth and the development of new areas of research and locations are also explored. The exhibit provisionally concludes with the success in the 2010 Excellence Initiative.

A centre of science and research derives sustenance from diverse interests and new discoveries. The University Museum therefore also includes a room for a wide range of special exhibits that change every three to four months. Besides offering insights into the multifaceted areas of research at Ruperto Carola – from apes to cell division – the exhibits also underscore the student and civic commitment that also shapes both the university and the city of Heidelberg.

The “Alte Aula” or Great Hall is used for ceremonies, concerts and lectures up to the present day. When it is not in use, visitors may view the Great Hall accompanied by a University Museum staff member. The Neo-Renaissance interior originates from the university's 500th anniversary in 1886 and includes depictions of major persons and events from the history of Heidelberg University.

When it was founded in 1386, the university, like other medieval communities, was granted the privilege to adjudicate for its own members. At first, city prisons were used to house transgressors of the law, but in 1545 the university set up its first own student prison. The prison (“Karzer”) was variously located around what is now University Square, often in extremely unhealthy quarters; in 1823 cells were constructed in the building at Augustinergasse 2 and used until 1914.