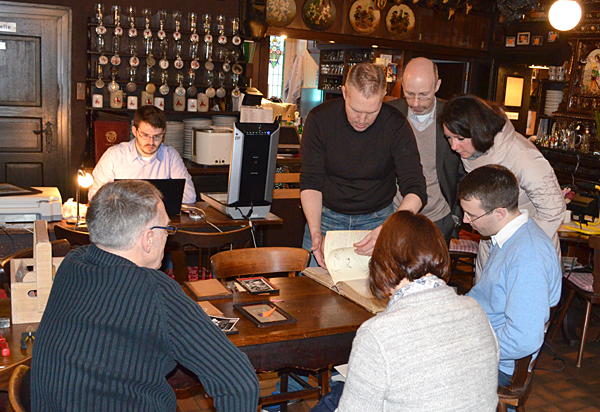 Around 400 photos and images that hang on the walls of Heidelberg's local pub “The Red Ox Inn” give insight into student life since the mid-nineteenth century. With the help of a digitalization project, the University Archives are preserving these historical documents. There are currently two experts from the archives working to scan the countless old photos, drawings, and lithographs that show student groups as well as members of the teaching staff of the university. At the conclusion of the digitalization work, the photos will be made publically accessible on the university’s online photo database, HeidICON.

The more than 300-year-old “Red Ox Inn”, which has been in the possession of the Spengel family for around the past 175 years, was in past centuries a beloved meeting point for student unions and fraternities. “We have comparatively few photos with motifs of this type in the University Archives’ image collections, and in this regard, there are many unique photographs to be found in this student pub,” clarifies the director of the archives, Dr. Ingo Runde. Several other photos with personal dedications of former students reflect student life in Germany’s oldest university. For example, there is a greeting from a student of Robert Bunsen, who was the “favorite chemist” of a turkish sultan. One can also find images of professors at the inn, such as a photo of the legal scholar and Minister of Justice of the Weimar Republic, Gustav Radbruch. Next to it, numerous photos and autographs of prominent visitors to Heidelberg adorn the walls, for example a photo of Mark Twain, who recorded his impressions of student life in Heidelberg in a book about his trip through Germany.

The City of Heidelberg Foundation is supporting the digitalization project with 3,000 Euro. In addition to the collection of photos, historical drinking horns and beer steins will also be photographed. The foundation, which was founded in 1986 by the City of Heidelberg to mark the 600th anniversary celebration of the university, seeks to further the connections between Heidelberg’s university and local population by fostering a cultural and social-scientific undertaking.

Links with further information (in German):