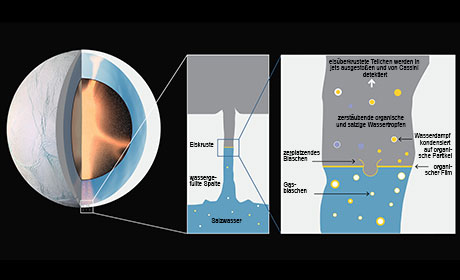 Under its icy crust, Saturn's moon Enceladus conceals an global ocean of liquid water. A detector on the Cassini space probe detected ice particles propelled from Enceladus that contain high concentrations of organic substances. They exhibit the structures typical of highly complex macromolecular compounds. "This is the first evidence of large organic molecules from an extraterrestrial aquatic world. They can be generated only by equally complex chemical processes," states planetologist Assistant Professor Dr Frank Postberg, study director and researcher at the Institute for Earth Sciences at Heidelberg University. The research results were published in “Nature”.

Enceladus is considered one of our solar system's most promising candidates in the search for extraterrestrial life. Huge icy jets several hundreds of kilometres high erupt from the Saturn's moon and are likely associated with hydrothermal vents in the moon's core. This hydrothermal activity leach out organic compounds of the rock core; they accumulate in the liquid ocean and are then transported to the surface. The ocean's surface is located – in fissures of the ice crust – just a few hundred metres below the icy surface of Enceladus.

The large organic molecules, however, are not water-soluble, explains Dr Postberg. They consist of complex mixtures of ring-shaped (aromatic) and linear (aliphatic) components with functional groups that contain oxygen and probably nitrogen, and some are made up of hundreds of atoms. "Gas bubbles probably transport the molecules to the surface, where they form an organic film," explains Dr Nozair Khawaja, who directed the related laboratory experiments with organic substances. "It looks as if this is how Enceladus conveys very high concentrations of its organic inventory from the ocean's depths to the surface of the water. From there, it is launched into space together with ocean water droplets."

Using data from the Cassini detector, the Heidelberg researchers were able to study not only the composition of the ocean on Enceladus but also the complex organic chemistry in the ocean's depths. "The discovery of macromolecular compounds originating from a moderately warm water environment will fuel interest worldwide in such icy moons as possible habitats for extraterrestrial life," states Prof. Dr Mario Trieloff from the Klaus Tschira Laboratory for Cosmochemistry at the Institute of Earth Sciences. Yet the available Cassini data alone do not definitively answer whether these large organic molecules stem from hydrothermal or even biogenic processes. "However, future Enceladus space mission could clarify this question quite easily," adds the researcher.

The Cassini-Huygens mission began in 1997 as a joint project of NASA, the ESA, and Italy's ASI space agency. Cassini entered Saturn's orbit in 2004 and was de-orbited in September 2017 to burn up in Saturn's atmosphere. The data used by the Heidelberg researchers is a subset of a dataset collected over 13 years – data that will certainly occupy the world of research for some time to come.