Motor And Energy Store In One 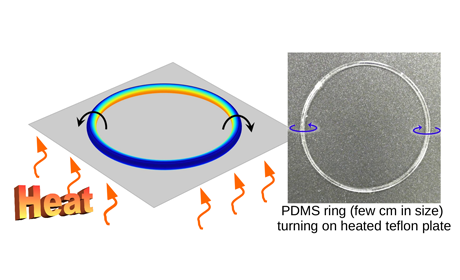 Physicists and material scientists have succeeded in constructing a motor and an energy storage device from one single component. They used an elastic polymer fibre closed into a ring that was made to rotate on application of an external energy supply. The researchers from the universities in Heidelberg and Strasbourg (France) hope that this mechanism will spur the development of intelligent materials with precisely defined functions. The findings were published in the journal “Nature Materials”.

„Our approach is minimalistic. We don’t rely on complex, high-tech materials but instead ask ourselves how the geometry and topology of a piece of material can elicit an intelligent function, such as rotation. That's how our wheel within came about,“ reports Dr Falko Ziebert of the Institute for Theoretical Physics at Heidelberg University, who co-directed the research with Dr Igor Kulić of the Institut Charles Sadron of the University of Strasbourg. Unlike a traditional rigid wheel that travels around an axle, an elastic deformation wave forms in this wheel within, causing it to move. “Simple heat flow generates the propulsion by causing thermal expansion in the material, much like the thermal convection in our atmosphere that determines our weather and climate. This thermal deformation interacts with the prescribed deformation of the ring geometry and elicits the rotation,” explains Dr Ziebert.

With the wheel within, the researchers hit upon an extremely simple principle to set polymer materials, like a nylon thread or a rubber band, into spontaneous motion. This principle will be the basis for further research. “Right now we are still playing with different geometries, materials, and other forms of energy flow through the system,” states Dr Kulić. One vision is to develop new technical devices with robust, self-propelled elements, in the form of artificial muscles, for instance. Researchers from the Swiss Federal Institute of Technology in Zurich (Switzerland) also contributed to the study.