J.L. Ward and J.M.D. Kruijssen: Not all stars form in clusters – measuring the kinematics of OB associations with Gaia. Monthly Notices of the Royal Astronomical Society (21 April 2018), doi: 10.1093/mnras/sty117

Stars Are Born in Loose Groupings 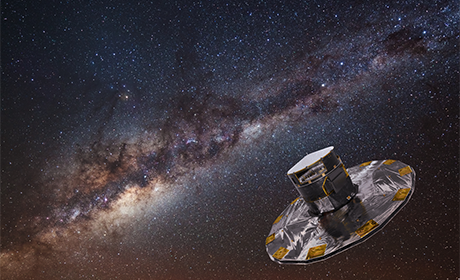 Artist’s impression of the Gaia satellite, with the Milky Way in the background.

Based on previously published data from the Gaia Mission, researchers at Heidelberg University have derived the conditions under which stars form. The Gaia satellite is measuring the three-dimensional positions and motions of stars in the Milky Way with unprecedented accuracy. Using these data, Dr Jacob Ward and Dr Diederik Kruijssen determined the positions, distances and speeds of a large number of young massive stars within 18 nearby loose stellar groupings. The researchers were able to demonstrate that there is no evidence whatsoever that these associations are expanding. They therefore could not have originated as a dense cluster and then expanded to their current size.

The long-standing model of star formation maintains that most, if not all stars originate in relatively densely packed star clusters. Experts refer to this as the "monolithic" model of star formation. Based on that model, every grouping of young stars observable today must have had its origin in one or more much denser clusters. After the stars formed, these clusters expelled the remaining molecular gas and were able to expand due to the loss of the gravitationally bound mass. Today's less dense clusters would have formed in this way and hence now, millions of years later, would evidence clear signs of strong expansion.

For Dr Ward and Dr Kruijssen, the results of their research clearly indicate that the "monolithic" model of star formation is simply not viable. Both researchers favour another explanation, namely that only a small fraction of stars are born within dense clusters. Instead, stars form across wide-spread molecular gas clouds across a broad range of densities. This "hierarchical" model of star formation explains today's star clusters and associations with a variety of densities showing no signs of further expansion.

The next publication of data from the Gaia Mission is scheduled for April 25 this year. By then, data on over a billion stars will have been collected – at least five hundred times that of the two million stars that were included in this initial study. Jacob Ward and Diederik Kruijssen hope that this new data will enable them to expand their study to potentially hundreds of loose stellar groupings, known as OB Associations, and to delve much further into the question of how stars originate. Dr Ward and Dr Kruijssen conduct research at the Institute of Astronomical Computing at Heidelberg University's Centre for Astronomy (ZAH). Their research is part of the work being done in the Collaborative Research Center (CRC 881) "The Milky Way System". 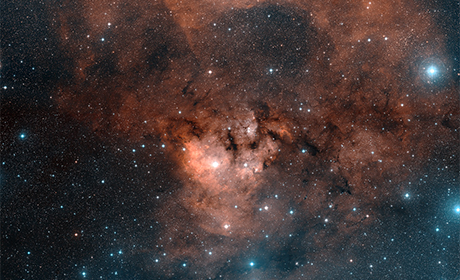 Hubble Space Telescope image of the OB association Cepheus OB4, one of the loose groupings of young stars studied by Dr Ward and Dr Kruijssen. The young stars are visible in bright blue; the gas and dust left after their formation is shown in red colours and dark shades. The results of the Gaia satellite show that Cepheus OB4 undergo no expansion, indicating that the stars formed in their current spatial configuration.
Editor: Email
Latest Revision: 2018-04-27