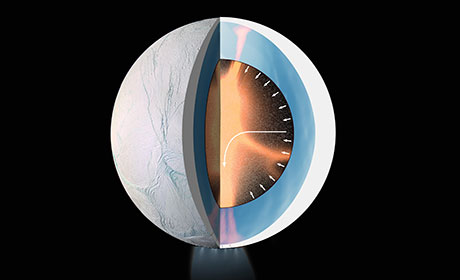 Surface, ocean and core of Saturn's moon Enceladus. The illustration shows the ice shell, which is thinner at the polar regions, with the ocean underneath. The core of Enceladus is assumed to be porous and thus permeable to ocean water. The graphic is based on a new model used to produce a three-dimensional simulation of these processes under the influence of Saturn's tidal forces. The orange "glowing" parts of the core represent the areas that reach temperatures of at least 90 degrees Celsius.

Heat from the friction of rocks caused by tidal forces could be the “engine” for the hydrothermal activity on Saturn's moon Enceladus. This presupposes that the moon has a porous core that allows water from the overlying ocean to seep in, where the tidal friction exerted on the rocks heats it. This shows a computer simulation based on observations from the European-American Cassini-Huygens mission. It also offers among others an answer to the long-standing question of where the energy that can support water in liquid form on the small, cryovulcanic moon far from the sun comes from. The Heidelberg University research group led by planetary scientist Assistant Professor Dr Frank Postberg participated in the investigation.

In 2015, the researchers had already shown that there must be hydrothermal activity on Saturn's moon. Icy volcanoes on Enceladus launch huge jets of gas and icy grains that contain fine particles of rock into space. A detector on the Cassini space probe was able to measure these particles. They originate on the seafloor more than 50,000 metres below the moon's ice shell, which ranges in thickness from three to 35 kilometres. Using computer simulations and laboratory experiments, the scientists discovered signs that deep below the rock and the water interact – at temperatures of a least 90 degrees Celsius. But where does the energy for the hydrothermal systems that drive the transport of matter come from? And how exactly do the grains of rock get to the surface of the icy moon?

The current studies under the direction of the University of Nantes (France) offer an explanation. According to Dr Postberg, the rock core of Enceladus is probably porous, which is why the water from the overlying ocean is able to deeply permeate it. At the same time, strong tidal forces from Saturn affect the “loose” rock in the moon's core. The new computer simulations show that the frictional heat is transferred very efficiently to the water circulating through the core, heating it to more than 90 degrees Celsius. This water dissolves some constituents of the rocky material. At certain hotspots, the hydrothermal fluids vent back into the ocean. Due to the cooling dissolved material now partially precipitates as fine particles, which are carried by the warm water to the ocean's surface. The hotspots are located primarily at the poles of Enceladus.

The ascending hydrothermal fluids probably trigger local melting in the ice layer of the polar region. According to Dr Postberg, this explains why the ice layer at the poles is considerably thinner than at the equator – three to ten kilometres versus 35 kilometres. “At the south pole, the water can even rise through fissures almost to the moon's surface. There, the microscopically small grains of rock from the core are catapulted along with ice particles into space, where they were measured by the instruments on the Cassini space probe,” explained the Heidelberg planetary scientist. The study also showed that only this heat source in the core can keep the overlying ocean water from freezing. Without it, the ocean would completely freeze in less than 30 million years. Dr Postberg conducts research at the Klaus Tschira Laboratory for Cosmochemistry. The laboratory ist part of the Institute of Earth Sciences at Heidelberg University. It is funded by the Klaus Tschira Foundation.

The aim of the Cassini-Huygens mission, a joint project of NASA, ESA, and Italy's ASI space agency that began in 1997, was to gain new insights into the gas planet Saturn and its moons. The Cassini space probe began orbiting Saturn in 2004. The mission concluded in September of this year when the probe entered Saturn's atmosphere. The latest research results were published in the journal “Nature Astronomy”.