It Takes the Right Amount of Carbon

Press Release No. 127/2017
28 September 2017
Heidelberg researchers create model that sheds new light on the formation of terrestrial planets and Earth 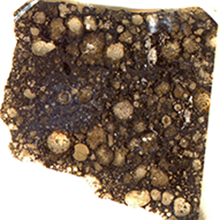 The photo shows a slice of the Allende meteorite with silicate globules of the size of a millimetre. These so-called chondrules were formed during short-duration flash-heating events in the solar nebula. Chondrite meteorites are considered as primordial material of the planets in our solar system. Some chondrite classes have up to a few percent of carbon in the dark rock matrix, but not in the chrondules, in which it got lost because of flash-heating events. The formation of the Earth from chondritic rock material in the inner solar system can explain the relatively low carbon content.

The element carbon and its compounds form the basics for life on Earth. Short-duration flash-heating events in the solar nebula prior to the formation of planets in our solar system were responsible for supplying the Earth with a presumably ideal amount of carbon for life and evolution. This shows a carbon chemistry model developed by Heidelberg University researchers. The research findings of Prof. Dr Hans-Peter Gail of the Centre for Astronomy and Prof. Dr Mario Trieloff of the Klaus Tschira Laboratory for Cosmochemistry at the Institute of Earth Sciences were recently published in the journal “Astronomy & Astrophysics”.

“On Earth, carbon is a relatively rare element. It is enriched close to the Earth´s surface, but as a fraction of the total matter on Earth it is a mere one-half of 1/1000th. In primitive comets, however, the proportion of carbon can be ten percent or more,” states Prof. Trieloff. According to the geochemist, comets originate in the cool outer regions of the solar system where volatile water and carbon compounds condensed into ice. Researchers assume that asteroid and comet impacts contributed these volatile elements to the newly formed Earth. But it is a puzzle why the amount of carbon on Earth is so low. “A substantial portion of the carbon in asteroids and comets is in long-chain and branched molecules that evaporate only at very high temperatures. Based on the standard models that simulate carbon reactions in the solar nebula where the sun and planets originated, the Earth and the other terrestrial planets should have up to 100 times more carbon,” states Prof. Gail.

The Heidelberg researchers assume that the short-duration flash-heating events were responsible for the “loss” of carbon. They suspect that all the matter in the inner regions of our solar system was heated, in some cases repeatedly, to temperatures between 1.300 and 1.800 degrees Celsius before small planetesimals and ultimately the terrestrial planets and Earth formed. The researchers believe the evidence lies in chondrules, the round grains that formed as molten droplets during these heating events before their accretion to meteorites. “Only the spikes in temperature derived from the chondrule formation models can explain today's low amount of carbon on the inner planets. Previous models did not take this process into account, but we apparently have it to thank for the correct amount of carbon that allowed the evolution of the Earth's biosphere as we know it,” says Hans-Peter Gail.

The researchers speculate that a carbon “overdose” would have probably been detrimental to the evolution of life. In its oxidised state, carbon forms the greenhouse gas CO2, which is removed from the Earth's atmosphere especially by the silicate-carbonate cycle, which acts like a thermostat. “Whether 100 times more carbon would permit effective removal of the greenhouse gas is questionable at the very least. The carbon could no longer be stored in carbonates, where most of the Earth's CO2 is stored today. This much CO2 in the atmosphere would cause such a severe and irreversible greenhouse effect that the oceans would evaporate and disappear,” states Mario Trieloff.

The research project is founded by the Klaus Tschira Foundation. The foundation promotes the advancement of natural sciences, mathematics and computer science and wants to raise appreciation in these fields. The Foundation¹s commitments begin in the kindergartens and continue at primary and secondary schools, universities and research facilities. The Foundation champions new methods of scientific knowledge transfer.