Metallurgy Likely Has More Than One Birthplace

Press Release No. 118/2017
1 September 2017
Researchers resolve contentious issue in the history of technology 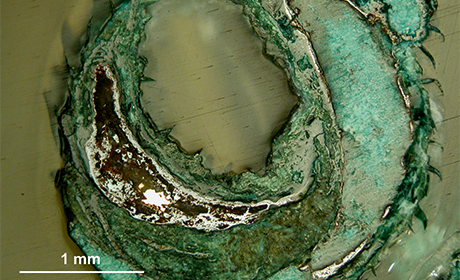 Copper bead from Çatalhöyük. It consists of very pure copper in metal form, as found in nature.

When and where did humans invent metal smelting? Scientists from Heidelberg University, London and Cambridge (Great Britain) have found the answer to this long-debated question in the history of technology. Metallurgy does not have a single origin but probably arose at various locations at about the same time. The experts reached this conclusion after re-examining the 8,500-year-old copper slag and analysing the chemical composition of other copper artefacts from the Stone Age settlement of Çatalhöyük in the Near East.

This history of civilisation is broadly divided into the Stone, Bronze and Iron Ages. What is little known, however, is that copper metal was already being processed at the beginning of the Neolithic Age approximately 10,000 years ago in the Fertile Crescent from the Levant through East Anatolia to the Zagros Mountains in Iran. "But because this is all pure, native copper, we can't really call it true metallurgy," explains Prof. Dr Ernst Pernicka, Scientific Director of Heidelberg University's Curt Engelhorn Centre for Archaeometry, which is located in Mannheim. Copper is found in nature as metal, and according to the researchers, was probably considered a special type of stone. But because the production of metal from ore ushers in a new era in human history, it is important to know when and where it first developed and whether metal smelting really originated in a single location.

Çatalhöyük is a Neolithic settlement long considered to be the birthplace of copper smelting.

For a long time a small amount of copper slag from the Neolithic site at Çatalhöyük was thought to be the earliest evidence for pyrometallurgical extraction of copper from ore. This settlement existed from approximately 7,100 to 6,000 BC and is considered to be the most significant site in the Near East that affords any insight into the development of human habitats. The copper slag was located in layers that dated back to 6,500 years before Christ and was therefore 1,500 years older than the world's earliest evidence of copper smelting. "The find seemed to point to the birthplace of metallurgy, with the technology slowly spreading from there in all directions," states Prof. Pernicka, who also heads the Archaeometry and Archaeometallurgy Research Group at the Institute of Earth Sciences at Heidelberg University.

However new studies, including those at the Curt Engelhorn Centre for Archaeometry, have demonstrated that the slag was an unintentional by-product of a domestic fire. The extreme heat of the fire slagged the green copper ores, which were used as pigment. The slag differs in chemical composition from another artefact from the Stone Age settlement, a bead of folded sheets made of pure copper. This threw new light on the scientific significance of the copper slag of Çatalhöyük, now putting the earliest known examples of copper extraction from ore around 5,000 BC in Southeast Europe and Iran. The current findings indicate that this revolutionary development in humankind probably came about at roughly the same time but in multiple locations. "We thereby solved a controversial problem in the history of technology," underscores Prof. Pernicka.

The research results were published in the “Journal of Archaeological Science”.