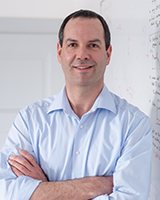 Heidelberg astrophysicist Dr Frank Bigiel is receiving a highly endowed grant from the European Research Council (ERC), an ERC Consolidator Grant for extraordinary research talents. Dr Bigiel will use the funding for a Heidelberg University project investigating the matter cycle in galaxies. The researcher is particularly interested in how the physical and chemical properties of the interstellar medium "regulate" the birth of stars in galaxies. The approx. 1.7 million euros in ERC funds will support the project over a five-year period. Frank Bigiel teaches and conducts research at the Institute of Theoretical Astrophysics, an arm of the Centre for Astronomy of Heidelberg University (ZAH). Research is set to begin in July 2017.

In the funded project entitled "EMPIRE: Galaxy Evolution in the ALMA Era – The Baryon Cycle and Star Formation in Nearby Galaxies," Dr Bigiel and his team will be studying how galaxies form new stars from the gas and dust that make up the so-called interstellar medium. The team will analyse the physical conditions of the interstellar medium such as density and temperature as well as how properties such as galaxy type, mass and rotational behaviour influence star formation. "The activity of star formation varies quite markedly as galaxies evolve over cosmic time as well as within galaxies. If we want to understand how and why our Milky Way forms stars such as our sun, for example, we need a detailed understanding of the physical and chemical properties of the interstellar medium," states Dr Bigiel. "Even our sun originated from interstellar gas; hence processes of star formation are of central importance to the formation of planets as well as the origin of life," continues the researcher. Dr Bigiel and his team will also analyse data from the ALMA Observatory in Chile as part of their project.

Frank Bigiel (b. 1978) studied physics at Heidelberg University and completed his doctoral dissertation at the Max Planck Institute for Astronomy. After receiving his doctorate, he conducted postdoctoral research at the University of California in Berkeley (USA). In summer 2011, he joined the Centre for Astronomy of Heidelberg University (ZAH) as a Gliese Fellow. In 2012, he became head of an Emmy Noether junior research team funded by the German Research Foundation.

The ERC Consolidator Grant is given to excellent young researchers whose own independent working group is in the consolidation phase. Scientific excellence is the main criterion.