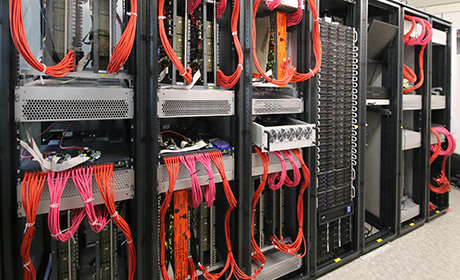 The novel, brain-inspired computing system BrainScaleS at the Kirchhoff Institute for Physics.

The novel, brain-inspired computing system BrainScaleS will be launched at the Kirchhoff Institute for Physics of Heidelberg University. A workshop will inform about possible applications of the neuromorphic system now coming online. The workshop is addressed to users from academic research, industry and education and will be broadcasted as a web stream on 22 March 2016 from 3 pm to 6 pm CET. The BrainScaleS system has been constructed by an international research team led by Prof. Dr. Karlheinz Meier in the framework of the Human Brain Project (HBP) funded by the European Commission.

Neuromorphic computers mimic aspects of architectures and principles found in biological brains on silicon chips. “The Heidelberg BrainScaleS system goes beyond the paradigms of a Turing machine and the von Neumann architecture, both formulated during the middle of the 20th century by the computer pioneers Alan Turing and John von Neumann. It is neither executing a sequence of instructions nor is it constructed as a system of physically separated computing and memory units. It is rather a direct, silicon based image of the neuronal networks found in nature, realising cells, connections and inter-cell communications by means of modern analogue and digital microelectronics,” explains Prof. Meier.

The recently completed system is composed of 20 silicon wafers with a total of four million neurons and a billion dynamic synaptic connections. Learn and developmental processes can be emulated with a thousand fold acceleration over real time, so that a biological day can be compressed to 100 seconds on the machine. Beyond basic research on self organisation in neural networks, potential applications are for example in energy and time efficient realisations of Deep Learning, a technology developed by companies like Google and Facebook for the analysis of large data volumes using conventional high performance computers.

In parallel to the launch of the Heidelberg BrainScaleS system a complementary system with comparable size called SpiNNaker will become operational at the University of Manchester (UK). Led by the computer scientist Prof. Dr. Steve Furber, co-designer of the ARM chip architecture in the 1980s, a large-scale system consisting of 500.000 densely interconnected ARM cores was constructed there. Also this system will be introduced during the web based workshop on 22 March. Together, the systems located in Heidelberg and Manchester constitute the “Neuromorphic Computing Platform” of the Human Brain Project.

The European developments are based on two previous European projects, FACETS and BrainScaleS, funded from 2005 to 2015 by the “Future Emerging Technologies” (FET) scheme of the European Commission, and on the national project SpiNNaker in the UK. With the two new machines now coming online Europe has a strong position in hardware development in the field of alternative computing. In the USA, the IBM Research Laboratory in Almaden (California) has developed the TrueNorth Chip, yet another approach, which is complementary to both of the European systems.