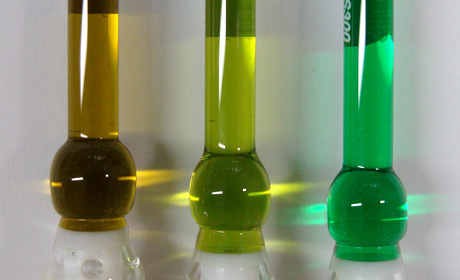 Solutions of the three metal carbene complexes of copper, silver and gold (left to right)

Some fundamental properties of the coinage metal elements gold, silver and copper, such as chemical behaviour or colours, are already predetermined in their atoms. The unique properties of gold can be largely explained by Albert Einstein’s theory of relativity. Chemists from Heidelberg University have been able to demonstrate this through their investigations of gold, silver and copper carbenes. They examined only single atoms of each metal in order to compare the three elements. The results of this research, led by Prof. Dr. Bernd Straub, were published in both the German and international editions of the journal “Angewandte Chemie” for applied and fundamental chemistry.

The properties of chemical elements are recurring periodically, since related elements possess the same number of electrons in the relevant outer shell and differ only due to additional inner electron shells. Copper, silver and gold belong to such a group of related elements. “Comparing copper metal, silver metal and gold metal with their numerous neighbouring metal atoms has never been a problem, as pure metals have been around for millennia,” explains Prof. Straub, a lecturer and researcher at the Institute of Organic Chemistry. However, he and his team were able to ascertain the differences of single atoms – in an otherwise identical molecule with which the metal atoms interact very strongly with a carbon atom via double bonds.

The Heidelberg scientists started their investigations with gold carbenes, which comprise a usually unstable – because highly reactive – double bond between carbon and gold. However, using a chemical “trick”, Prof. Straub and his team found a way to obtain and to isolate a stable gold carbene complex for research purposes. In further steps they managed to prepare and characterise a copper carbene and a silver carbene with otherwise identical structure, even though both these compounds were much more sensitive and unstable than the gold carbene. Nevertheless, these complexes enabled the scientists to make a detailed comparison of the three elements of the coinage metal group – copper, silver and gold – on the scale of a molecule. Through the crystallisation of the particularly unstable silver carbene, they were able to determine the bond length between silver and the doubly-bonded carbon via an x-ray structural analysis. They then compared this with the shorter, stronger bonding between gold and carbon.

From their observations the researchers conclude that the properties of gold are fundamentally determined by “relativistic effects”. These effects come into play in physics when a phenomenon can no longer be described as “classical”. In chemistry this applies to the properties of certain elements. The relativistic effects derive from Albert Einstein‘s theory of relativity with the well-known formula E = mc2 by which Einstein established a connection between energy, mass and speed of light. “Of the stable elements, the predicted relativistic effects are most noticeable with gold,” says Prof. Straub. A well-known example is the striking difference in colour between yellow gold metal and colorless silver metal.

Bernd Straub explains that, due to the attraction of the 79-fold positively charged gold nucleus, negatively charged gold electrons achieve such high velocities close to the speed of light (c) that additional motion energy (E) cannot substantially increase their speed. Instead, these electrons increase their mass (m). This effect is seen in the outermost electron shell, which is active and thus responsible for chemical behaviour, colours and properties of coinage metals. In the case of gold, this leads to a strengthening of its bonds. Gold compounds thereby have a better chance, for example, of activating a triple bond between two carbon atoms. The comparison between the coinage metal elements gold, silver and copper with the double-bond carbon in each case showed that the atomic behaviour of gold is more similar to copper than to silver, although silver is its direct neighbour in the periodic system.

The research findings of the Heidelberg chemists confirm that Einstein‘s theory of relativity does not just play a crucial role in astronomy and space travel with their huge distances. Prof. Straub also emphasises its significance in the world of electrons, atoms and molecules.