Cosmology research group of the Institute for Theoretical Physics

“Planck” Puts Einstein to the Test

Press Release No. 39/2015
5 March 2015
Data analysis of satellite mission on dark energy and theory of gravitation 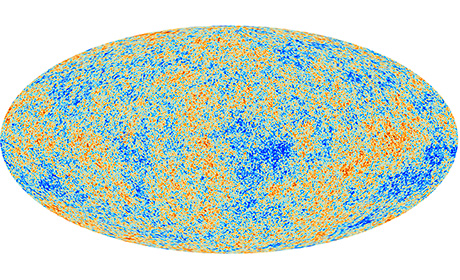 Illustration: ESA and the Planck Collaboration

Researchers, including physicists from Heidelberg University, have gained new insights into dark energy and the theory of gravitation by analysing data from the “Planck” satellite mission of the European Space Agency (ESA). Their results demonstrate that the standard model of cosmology remains an excellent description of the universe. Yet when the Planck data is combined with other astronomical observations, several deviations emerge. Further studies must determine whether these anomalies are due to measurement uncertainties or undiscovered physical correlations, which would also challenge Einstein’s theory of gravitation. Thus, the analysis of the Planck data gives major impetus for research during future space missions.

From 2009 to 2013, the ESA’s Planck satellite took measurements of the so-called cosmic microwave background (CMB). The CMB is radiation that originated approx. 13 billion years ago, about 380,000 years after the Big Bang. Due to the expansion of the universe, this light is still observable today at microwave wavelengths across the entire sky. Between 2009 and 2013, Planck surveyed the sky to map this ancient light in unprecedented detail. Now several research articles on the Planck data have been published. The Cosmology research group of the Institute for Theoretical Physics (ITP) at Heidelberg University participated in one of these studies.

“Precise measurements of cosmic microwave radiation reveal minute differences in temperature. On a celestial map, these temperature fluctuations look like small specks. Every speck is a region of somewhat higher or lower temperature,” explains Dr. Valeria Pettorino, junior research group leader at the ITP. Prior findings point to only six parameters that describe the development of the universe after the Big Bang with relative accuracy, using what is known as the standard model of cosmology. The temperature differences of the cosmic microwave background have allowed researchers to identify these parameters with extreme accuracy. One of them accounts for so-called dark energy, which comprises about 70 per cent of the total energy of the universe and is responsible for its accelerated expansion.

Research into dark energy is still in its infancy. Even though the data from the cosmic microwave background shows that dark energy is required, its composition remains unclear. Using the latest satellite data, the Planck researchers have put various theories to the test that take dark energy into account and are based on modified gravitation – and hence also call into question the theory of gravitation postulated in Albert Einstein’s theory of relativity. They employed a broad spectrum of methods and other measurement data, including Baryonic Acoustic Oscillations, which are density waves from the early universe, local measurements of the Hubble constant, which specifies the universe’s rate of expansion at the present day, as well as a certain group of supernovae or exploding stars.

From the Planck data the scientists were able to determine just how much dark energy existed in the past. “Surprisingly, the amount of early dark energy was significantly less than we expected. So far, it had been assumed that dark energy comprised a maximum of one per cent of all energy at the time the microwave background radiation was released.  But the new Planck results indicate that it could have been no more than 0.4 per cent,” explains Dr. Pettorino. “That’s a big problem for the theoretical models of dark energy which predicted a considerably higher amount of energy for the early universe,” adds Dr. Matteo Martinelli, postdoc at the ITP.

Furthermore, the analysis of the Planck data also revealed small disruptions in gravity itself that are not completely consistent with the standard model of cosmology. Even though these deviations are tiny and vary depending on the dataset studied, they call for further testing and investigation with other sets of data. “Further study might enable us to find out whether we are really dealing with deviations from Einstein’s law of gravity that require a return to the drawing board,” says Valeria Pettorino. According to the physicist, the analyses are of key importance to cosmological research on dark energy and gravitation. They can give invaluable impetus to upcoming satellite missions, such as the 2020 Euclid mission planned by the ESA and NASA. The astronomical institutes of Heidelberg University will again be major participants in this mission.