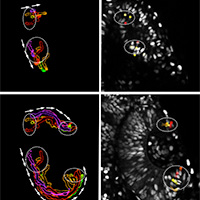 In an in vivo analysis of eye development, researchers at Heidelberg University and the University of Freiburg have gained fundamental new insight into the development of coloboma of the eye, prompting them to revise the classical view of the development of this sensory organ in vertebrates. The team led by developmental and cell biologists Dr. Stephan Heermann and Prof. Dr. Jochen Wittbrodt of the Heidelberg Centre for Organismal Studies (COS) used in vivo 4D microscopy to demonstrate that directed tissue flow transforms the optic vesicle into the optic cup during eye development. This is not only critical for understanding the cause of coloboma (“cat eye syndrome”), but also means that eye development in vertebrates, including humans, is fundamentally different than has been taught for more than 70 years. The results of their research were published the journal eLife.

In their analysis, the research group, which included Prof. Dr. Kerstin Krieglstein of the Department of Molecular Embryology at the Institute of Anatomy and Cell Biology of the University of Freiburg, combined modern genetics with time-lapse microscopy of living cells. This allowed them to record the dynamics of organ morphogenesis. They made three fundamental discoveries in the process. “We now know that that an organ forms through flow, not incrementally in steps. If the flow is stopped, coloboma develops. And we found the source of the stem cells in the eye, which is of major importance in stem cell research,” explains Prof. Wittbrodt.

The eye is an outgrowth of the brain and forms in the embryo from a sac-like vesicle that quickly transforms into an optic cup with an interior retina surrounded on the outside by pigment epithelium. Major problems result if this step fails; the optic cup does not close and results in a coloboma, one of the most frequent causes of paediatric blindness.

Until now, the optic cup was believed to develop rather statically from two layers of the vesicle, with the lens-facing layer becoming the retina and the other, lens-averted layer forming the pigmented epithelium. “However in the detailed investigation of this developmental step using high-resolution video microscopy on living fish, we discovered that the optic cup forms from a dynamic flow of lens-averted cells into the lens-facing optic cup, exactly the opposite of static development,” explains Dr. Heermann. The researchers also found the growth factor that controlled the flow of tissue and was thus essential for eye development. The signalling pathway of the growth factor BMP must be modulated for the tissue to flow and transform the vesicle into the cup. “Without this modulation, the tissue remains stuck on the lens-averted side and begins to develop into the retina,” continues Stephan Heermann.

Yet another important finding of the study is the close connection of movement (morphogenesis) and differentiation. It was already known that precursor cells begin to differentiate into nerve cells of the retina in the centre of the interior optic cup and continuously advance into the periphery. “The new data gives us a completely new perspective on this event,” explains Jochen Wittbrodt. The cells that differentiate first are already located in the interior of optic cup at the start of development. The cells that differentiate later do not flow into the optic cup until later, and only there they are initially subject to the influence of differentiation signals. Due to their position, these cells are not exposed to the signals in the early phase. This is especially true in the stem cells of the fish model system studied.

“Using 4D microscopy, we were now able to identify and analyse this special population of cells,” explains Jochen Wittbrodt. It was clear that there are two distinct areas in the lens-averted domain of the developing optic cup, which is where these future stem cells are initially located. These cells are the last to reach the optic cup and end up at the boundary between the retina and the pigment epithelium. “Our findings describe the origin of the stem cells in the eyes of fish for the first time and imply that these cells are defined early. At first glance this may not seem very interesting for humans, who no longer have stem cells in the eye. But this data is extremely important for stem cell research.”

According to Stephan Heermann, the current results have high biomedical significance because they explain the origin of a coloboma. The bifurcated flow of tissue described creates a fissure on the underside of the eye, the optic fissure. As the eye continues to develop, it is critical that this fissure close so the eye can see in all directions. “The current data clearly indicates that both the development of the optic fissure and its closure essentially depend on the coordinated flow of tissue.” A coloboma is the medical term for an open optic fissure.