Press release by the Max Planck Institute for Astronomy 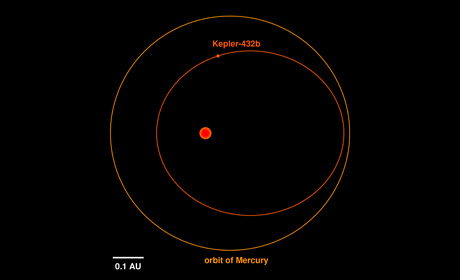 Illustration of the orbit of Kepler-432b (inner, red) in comparison to the orbit of Mercury around the Sun (outer, orange). The red dot in the middle indicates the position of the star around which the planet is orbiting. The size of the star is shown to scale, while the size of the planet has been magnified ten times for illustration purposes. The orbit of Kepler-432b is highly elongated. As a consequence, the distance between the planet and the star as well as the temperature on the planet change dramatically during a single orbit.

Two research groups of Heidelberg astronomers have independently of each other discovered a rare planet. The celestial body, called Kepler-432b, is one of the most dense and massive planets known so far. The teams, one led by Mauricio Ortiz of the Centre for Astronomy of Heidelberg University (ZAH) and the other by Simona Ciceri of the Max Planck Institute for Astronomy (MPIA) in Heidelberg, report that the planet has six times the mass of Jupiter, but about the same size. The shape and the size of its orbit are also unusual for a planet like Kepler-432b that is revolving around a giant star. In less than 200 million years, this “red giant” will most likely swallow up the planet. The results of this research were published in “Astronomy & Astrophysics”.

“The majority of known planets moving around giant stars have large and circular orbits. With its small and highly elongated orbit, Kepler-432b is a real ‘maverick’ among planets of this type,” says Dr. Davide Gandolfi from the state observatory Königstuhl, which is part of the Centre for Astronomy. Dr. Gandolfi is a member of the research group that discovered the planet. He explains that the star around which Kepler-432b is orbiting has already exhausted the nuclear fuel in its core and is gradually expanding. Its radius is already four times that of our Sun and it will get even larger in the future. As the star is reddish in colour, astronomers call it a “red giant”.

The orbit brings Kepler-432b incredibly close to its host star at some times and much farther away at others, thus creating enormous temperature differences over the course of the planet’s year, which corresponds to 52 Earth days. “During the winter season, the temperature on Kepler-432b is roughly 500 degrees Celsius. In the short summer season, it can increase to nearly 1,000 degrees Celsius,” states astronomer Dr. Sabine Reffert from the state observatory Königstuhl. Kepler-432b was previously identified as a transiting planet candidate by the NASA Kepler satellite mission. From the vantage point of the Earth, a transiting planet passes in front of its host star, periodically dimming the received stellar light.

Both groups of researchers used the 2.2-metre telescope at Calar Alto Observatory in Andalucía, Spain to collect data. The group from the state observatory also observed Kepler-432b with the Nordic Optical Telescope on La Palma (Canary Islands). Thus, they were able to acquire the high-precision measurements needed to determine the planet’s mass. “The discovery of Kepler-432b was possible only thanks to the flexible scheduling of observation time on the telescopes and the outstanding support provided by the technicians and telescope operators on the two sites,” stresses Dr. Gandolfi.

“The days of Kepler-432b are numbered, though,” adds Mauricio Ortiz, a PhD student at Heidelberg University who led one of the two studies of the planet. “In less than 200 million years, Kepler-432b will be swallowed by its continually expanding host star. This might be the reason why we do not find other planets like Kepler-432b – astronomically speaking, their lives are extremely short”.