Cell and tumour biologist Prof. Dr. Hellmut Augustin and bioinformaticist Prof. Dr. Roland Eils will be presented with this year’s HMLS Investigator Award for their outstanding efforts towards promoting Heidelberg as a centre of research. In their work for the Heidelberg Molecular Life Sciences (HMLS), they combine “the activities of the university and of non-university research institutions in an exemplary manner”, as stated in the award presentation speech for the scientists, both of whom do research at the German Cancer Research Center (DKFZ) and at Heidelberg University. Prof. Augustin and Prof. Eils will accept the award, which is endowed with 100,000 euros, on 5 December 2014. The HMLS initiative belongs to the field of focus “Molecular and Cellular Basis of Life” that is part of Heidelberg University’s Institutional Strategy. It involves the Faculty of Biosciences, the Medical Faculties Heidelberg and Mannheim, the Max Planck Institute for Medical Research, the DKFZ and the European Molecular Biology Laboratory (EMBL). 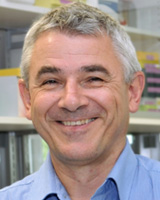 Hellmut Augustin (born 1959) studied veterinary medicine at the University of Veterinary Medicine Hannover, where he earned his doctor’s degree in 1987. After receiving another doctorate from Cornell University in Ithaca/New York (USA), he transferred to the University of Göttingen in 1992. There he qualified as professor of molecular cell biology in 1997. In 2001, he accepted a position at the Tumor Biology Center Freiburg, before taking up a professorship at Heidelberg University in 2006. He heads the Department of Vascular Biology and Tumor Angiogenesis at the university's Medical Faculty Mannheim and holds the corresponding chair, endowed by the Aventis Foundation; he is also director of the Division of Vascular Oncology and Metastasis at the German Cancer Research Center. Prof. Augustin is one of two directors of the DKFZ-ZMBH Alliance, the strategic partnership between the German Cancer Research Center and the Center for Molecular Biology of Heidelberg University (ZMBH), and spokesperson of the Collaborative Research Centre/Transregio “Vascular Differentiation and Remodeling” in Mannheim, Heidelberg and Frankfurt.

Prof. Augustin’s research focuses on the molecular mechanisms of angiogenesis – blood vessel formation – and lymphangiogenesis. In addition to the physiological interdependencies, the researcher and his team investigate how tumours and blood vessels or lymphatic vessels interact in the course of tumour growth and metastasis. They also examine the relationship between tumour cells and endothelial cells to find out why tumours metastasise most frequently in certain organs. Another research subject is the formation and spread of tumours, depicted as dynamic processes in time and space. The researchers are looking to establish models to help them investigate fundamental biological questions of tumour progression. These models will also be used as pre-clinical test systems in order to define the “therapeutic window” for anti-angiogenic tumour strategies. 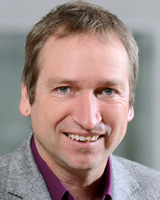 Roland Eils (born 1965) studied mathematics and computer science at RWTH Aachen University and earned his doctorate at Heidelberg University’s Interdisciplinary Center for Scientific Computing (IWR) in 1995. His first position was as a post-doctoral researcher in France in 1996; from there he returned to Heidelberg to head a research group at the IWR. In 2000, after winning the Biofuture Award of the German Ministry of Education and Research, he transferred to the German Cancer Research Center, where he became head of the Division of Theoretical Bioinformatics in 2002. Two years later, he additionally accepted a professorship at Heidelberg University’s Faculty of Biosciences. He heads the Department of Bioinformatics and Functional Genomics at the university’s Institute of Pharmacy and Molecular Biotechnology. In 2010 Roland Eils was a visiting professor at Harvard Medical School and in the following year, he declined a position at the renowned Cold Spring Harbor Laboratory in New York. Prof. Eils was instrumental in founding the BioQuant centre in Heidelberg and currently serves as managing director of this central scientific institution that is dedicated to the quantitative analysis of molecular and cellular biosystems. He is also co-director of the Heidelberg Center for Personalized Oncology (DKFZ-HIPO) at the German Cancer Research Center.

In his research, Prof. Eils aims at integrating the tools of mathematical modelling, image analysis and informatics into life science research in order to contribute to the disciplines of systems biology and bioinformatics. To this end, his research team uses a number of different methods to examine questions regarding viral infections, the progression of programmed cell death or the mutated genome of cancer cells. Prof. Eils is a major contributor to the International Cancer Genome Consortium (ICGC), one of the largest interdisciplinary biomedical projects worldwide, which aims at identifying the molecular causes of cancer. He is co-coordinator of the German subproject that deals with brain tumours in children. The scientist is also responsible for bioinformatics and data management in two other ICGC projects and for the German contribution to the worldwide International Human Epigenome Consortium (IHEC) that is dedicated to whole genome sequencing. In addition, he is advisor to the student teams of Heidelberg University participating in the “international Genetically Engineered Machine” competition, who won the title of world champion of synthetic biology of this iGEM competition in two consecutive years.

The first speaker at the award ceremony will be Thomas Rausch, coordinator of the “Heidelberg Molecular Life Sciences” initiative. Prof. Augustin’s achievements will be detailed by Prof. Dr. Christof Niehrs, DKFZ researcher and founding director of the Institute of Molecular Biology gGmbH in Mainz. The laudatory speech for Prof. Eils will be given by Prof. Dr. Jürgen Wolfrum of the Institute for Physical Chemistry, honorary director of Heidelberg University’s BioQuant centre. Both award winners will take the opportunity to talk about their achievements. The public ceremony on Friday, 5 December 2014, will take place in the BioQuant building, Im Neuenheimer Feld 267, Ute Greenier-Saal (7th floor) at 5.00 pm.