Film about the first Santander Summer School in November 2013 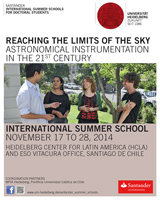 Outstanding young researchers from Latin America and Europe will gather in Santiago de Chile from 17 to 28 November 2014 for the third “Santander International Summer School” of Heidelberg University. Twenty doctoral students from Belgium, Chile, France, Germany, Great Britain, Italy, Mexico, the Netherlands, Portugal and Spain will explore the current research landscape in the field of astronomy. They will also have the opportunity to exchange ideas with renowned scientists from various European and Latin American universities. The summer school, entitled “Reaching the Limits of the Sky: Astronomical Instrumentation in the 21st Century”, is being funded by Santander Universidades at the Heidelberg Center for Latin America. The Max Planck Institute for Astronomy in Heidelberg and the Pontifical Catholic University of Chile are cooperating partners. The event will close with a two-day symposium at the Santiago office of the European Southern Observatory (ESO), with 120 researchers from around the globe expected to attend.

The third “Santander International Summer School” will concentrate on new methods and technologies that can substantially boost the power of modern telescopes. “Turbulence in the earth’s atmosphere causes the stars to flicker, which blurs the images”, explains Prof. Dr. Andreas Quirrenbach of the Centre for Astronomy of Heidelberg University (ZAH). “Now we can measure the flickering and correct it with movable mirrors. This gives us pictures that are so sharp as if they had been taken with a telescope in space – for a fraction of the cost.” The second week of the summer school will be “even more exciting” for the participants, according to the Heidelberg researcher. “We’ll be discussing how to connect multiple large telescopes so that we can observe the birth of planetary systems around young stars, for example.”

As Prof. Quirrenbach points out, Heidelberg is one of the most important research locations for astronomy in Europe. It is home to the State Observatory, the Institute for Astronomical Computing and the Institute of Theoretical Astrophysics, which together form the ZAH, and astronomical research is also conducted at the Max Planck Institutes for Astronomy and Nuclear Physics as well as the Heidelberg Institute for Theoretical Studies (HITS). The necessary measuring instruments are being designed and built at the State Observatory and the MPI for Astronomy. “Because several instruments built in Heidelberg are currently being used on ESO’s large telescopes in Chile, probably the best observatory site in the world, a cooperation between Heidelberg and Santiago was the natural choice for the summer school,” says Prof. Quirrenbach.

In addition to researchers from Heidelberg and Santiago de Chile, scientists from Austria, France, the Netherlands and the U.S. will also participate in the summer school. Dr. Roland Gredel and Prof. Dr. Thomas Henning from the Max Planck Institute for Astronomy and Prof. Quirrenbach of the ZAH are the scientific directors for the event. Prof. Dr. Andrés Guesalaga and Prof. Dr. Leopoldo Infante from the Pontifical Catholic University of Chile are also involved in organising the summer school. A comprehensive programme of lectures and presentations awaits the doctoral students. A two-day excursion to ESO’s Very Large Telescope in northern Chile is also scheduled, along with two public lectures at the planetarium of the University of Santiago de Chile.

In the framework of its cooperation with Banco Santander, Heidelberg University receives funding from the Santander Universidades Global Division, which is used for the organisation of international winter and summer schools with participants from Latin America, Europe and Asia. These events take place alternatively at the Heidelberg Center for Latin America in Santiago de Chile, the Heidelberg Center South Asia in New Delhi (India), the International Science Forum Heidelberg and a university in Japan. The summer schools set out to encourage mobility on the part of young scientists and support the emergence of new networks of excellence in research. The fourth “Santander International Summer School”, being held in March 2015 at Kyoto University in Japan, is devoted to the concept of religion from a transcultural perspective. Other events on molecular catalysis in chemistry and on the topic of global sustainability in the earth sciences are planned for July and September of next year.