The Bertalanffy Lectures will be held in the Ludwig von Bertalanffy lecture hall, Im Neuenheimer Feld 230, on 26 and 27 September 2013. The lectures begin at 2 pm on both days. Members of the media are cordially invited. Before the event, Prof. Dr. Joachim Wittbrodt, managing director of the Centre for Organismal Studies, will be available for inquiries or interviews. Appointments can be arranged via the press office (phone: +49 6221 54-2311).

Centre for Organismal Studies (COS)

Pupils Meet Scientists: An Introduction to Research in the Life Sciences 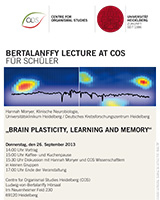 To make the frequently complex research issues and findings in the life sciences understandable to interested pupils, Heidelberg University’s Centre for Organismal Studies (COS) is presenting another event in the series of “Bertalanffy Lectures”, a forum supported by the Klaus Tschira Foundation for exchanges between pupils and scientists from various disciplines. At the invitation of the COS, renowned scientists from all over the world share their current knowledge from research at the intersection of biology, medicine and the life sciences, as well as answer questions from the participants. The next lecturer is neurobiologist Prof. Dr. Hannah Monyer from Heidelberg University and the German Cancer Research Center (DKFZ), who will meet with approximately 250 pupils on 26 September 2013, with an additional event for researchers to be held 27 September 2013.

The first part of the programme (26 September) is entitled “Brain Plasticity, Learning and Memory”. After words of welcome by Prof. Dr. Bernhard Eitel, Rector of Heidelberg University, the presentation will focus on different experimental paradigms that are used to study the plasticity of the brain and how this plasticity may relate to memory. Prof. Monyer’s lecture is directed at pupils in the last years of grammar-school and students at so-called “Stützpunktschulen” that specialise in biology. Afterwards Prof. Monyer and researchers from the Centre for Organismal Studies will join attendees for discussion in small groups.

The following day (27 September) is reserved for scientists of the Heidelberg research hub and includes not only the lecture, entitled “Can Studies in Mice Help Us Understand how Memory Functions in Humans?”, but also provides the opportunity for intensive exchange among attendees. A major focus is on the potential of experimental approaches – based on animal models – and the limitations they involve. Hannah Monyer is the Clinical Director of the Clinical Neurobiology Department, a joint department of the DKFZ, Heidelberg University and Heidelberg University Hospital.

The Centre for Organismal Studies unites zoology and plant science in a joint interdisciplinary institution, with a view to investigating the complex biological mechanisms of living systems from molecular analysis and the level of the cell to the entirety of an organism. The name of the lecture series, begun in October of last year, commemorates Ludwig von Bertalanffy (1901-1972), a significant theoretical biologist and systems theorist of the 20th century. Systems theory is a cross-disciplinary research model in which “systems” are drawn upon to describe and explain phenomena of different levels of complexity.The Klaus Tschira Foundation supports the sciences, mathematics and computer science in research and teaching and provides funding for projects involving pupils.