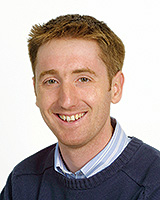 Biochemist Dr. John Briggs, scientist at the European Molecular Biology Laboratory (EMBL) in Heidelberg, has been selected to receive the Chica and Heinz Schaller Research Award for the year 2012. The prize, which is endowed with 100,000 euros of research funding, is awarded by the C.H.S. Foundation for outstanding work in basic biomedical research in Heidelberg. Dr. Briggs receives this distinction for his innovative and pioneering research elucidating complex viral and cellular structures by means of electron microscopy. The presentation of the award is scheduled for 8 February 2013 at Heidelberg University.

Dr. Briggs’ research interests focus on virus structures and biologically relevant cellular protein complexes, which he investigates using advanced cryo-electron microscopy techniques. This method makes it possible to analyse complex and irregularly formed biological structures with high spatial resolution in unstained frozen samples, hence in a close to native state. In this way, the scientist was able to to perform detailed analyses of the architecture of mature and immature particles of the human immunodeficiency virus (HIV) and related viruses. These studies provide insights into the mechanism of HIV particle assembly in the host cell and allow to draw conclusions about structural rearrangements during the process of viral maturation that are crucial for virus infectivity. Both particle assembly and rearrangements during maturation are targets for new antiviral strategies. Other research pursued in the Briggs Group focuses on the structure of other pathogenic viruses, e.g. the influenza virus and the Marburg virus. More recently, Dr. Briggs and his team have also investigated the three-dimensional structure of cellular transport vesicles and developed methods for correlating high-resolution structural data with information on the dynamics of the corresponding structures in the living cell.

The C.H.S. Foundation was established in 2000 by the scientists Chica and Heinz Schaller. It supports basic biomedical research in Heidelberg by providing funding for innovative approaches. The funding intended for flexible use is provided especially to support young scientists in conducting independent projects. A major funding instrument is the Chica and Heinz Schaller Research Award which is awarded annually since 2005. The 2012 Chica and Heinz Schaller Research Award will be presented at a public ceremony in the English language on 8 February. It will take place in the Ute Greenier Hall of the BioQuant Building (7th floor), Im Neuenheimer Feld 267, and begins at 4.30 pm. All interested are welcome to attend.

Note for newsdesks
A digital photo of the prize winner is available from the press office (see below).