Photo of a neuromorphic chip designed by the Heidelberg group of Prof. Dr. Karlheinz Meier. The chip features 384 neurons as well as 100.000 synapses and operates at a speed of approxinately 100.000 times biological realtime.

With its goal of successively reconstructing the complex functional principles of the human brain and simulating them using fundamentally new computer architectures, the “Human Brain Project“ is one of two large-scale projects selected for funding by the European Commission within the framework of the FET flagship initiative. Physicists of Heidelberg University will be major contributors to the ten-year research project: Prof. Dr. Karlheinz Meier of the university’s Kirchhoff Institute for Physics is one of the co-directors of the research network; his work group will also develop one of the six technical platforms of the project. The EU funding programme “Future and Emerging Technologies Flagship” (FET Flagship) finances large-scale research initiatives with visionary goals that exceed the scope of conventional research funding.

Prof. Dr. Bernhard Eitel, Rector of Heidelberg University, commented on the university’s success in the FET Flagship programme: “The new project will leave an indelible mark on the research conducted at Heidelberg University. It promises answers to central challenges in today’s research, and it has the potential to fundamentally change the ways in which we store and use information. We are proud to host this project at our university and to be able to develop new prospects for many disciplines, in keeping with our motto `SEMPER APERTUS´.”

Detail of a silicon wafer for a neuromorphic computing system currently operational at Heidelberg University. A complete wafer features 200.000 neurons and 50.000.000 synapses, manufactured in a 180nm CMOS technology.

Draft design of a neuromorphic chip developed by the Heidelberg group of Prof. Dr. Karlheinz Meier.

More than 80 European and international institutions will contribute to this massive undertaking, which follows three years of preparations; the project will also be supported by important partners in North America and Japan. The estimated cost of the research work in the years 2013 to 2023 is approximately 1.19 billion EUR. The entire project – a two-and-a-half year ramp-up phase is scheduled to begin at the end of this year – will be coordinated by neuroscientist Prof. Dr. Henry Markram of the Ecole Polytechnique Fédérale de Lausanne (EPFL) in Switzerland. The second co-director besides Prof. Meier is Prof. Dr. Richard Frackowiak of the Centre Hospitalier Universitaire Vaudois and the Université de Lausanne. Aided by the six project platforms, the “Human Brain Project” is expected to both provide new medical and neuroscientific insights into the human brain and its diseases and contribute to the development of pioneering computing and robotics technologies.

At Heidelberg University, the team of scientists led by Karlheinz Meier will establish a project platform for neuromorphic computing. The term “neuromorphic” describes systems that are based on electronic models of neural circuits. They simulate the neurobiological structures of the nervous system and are hence fundamentally different from numerical simulations in conventional high-performance computers. “Neuromorphic systems should share important properties of the human brain: fault tolerance, the ability to learn and very low energy consumption”, explains Prof. Meier. The Heidelberg scientist has directed two European research projects on this subject in the past ten years, pioneering the interdisciplinary cooperation between the neurosciences, computer science, engineering and physics. The projects developed the concept of universal and configurable physical models of neural circuits – prototypes for a completely new kind of computer architecture. The project platform of Heidelberg University is joined by two other German platforms at the Jülich Research Centre  and at Technische Universität München. Overall, scientists of 16 German institutions are contributing to the “Human Brain Project”.

For more information on the “Human Brain Project”, visit www.humanbrainproject.eu

Note for news desks:
Digital photos are available from the press office. 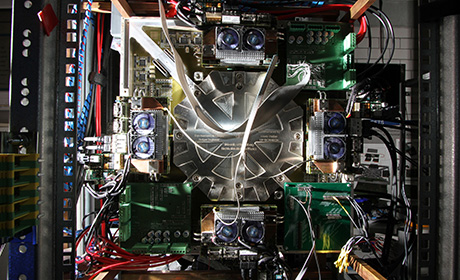