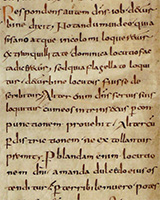 In the course of research on written testimonies from the era of Charlemagne (d. 814), Dr. Tino Licht, a Heidelberg University scholar, has chanced upon a manuscript from Corbie Abbey containing the earliest known example of the so-called Caroline minuscule on which today’s Latin script is based. Many scholars have conjectured that this influential medieval script was invented at Charlemagne’s palace school, but Dr. Licht’s find dismisses this theory. The Caroline minuscule must be older than was previously assumed. Comprehensive documentation and analysis can be found in the latest edition of the medieval studies journal Mittellateinisches Jahrbuch.

Tino Licht, who works at Heidelberg University’s Centre for European Historical and Cultural Studies, tells us that doubts about the origin of this script have been voiced before now. There is a transcription of the Bible in Caroline minuscule that was undertaken at Corbie Abbey, a monastery in present-day France. But so far it was impossible to determine the exact year in which this 8th century manuscript was committed to parchment. The period in which this Bible was produced coincides with the early years of Charlemagne’s palace school. In the course of research leading up to a project at Heidelberg University’s collaborative research centre “Material Text Cultures”, Dr. Licht came across another manuscript from Corbie Abbey containing three pages written in the Caroline minuscule. This codex, today in the possession of Staatsbibliothek Preußischer Kulturbesitz library in Berlin, was quite definitely prior to Charlemagne’s rule.

“The use of the new script makes an experimental impression,” says the Latin scholar. “They were trying it out. In the Middle Ages a script like this was not just invented, as is the case today. It was developed as part of the living tradition of a scriptorium. In the 8th century Corbie was something akin to a laboratory for new scripts.”  This is another point that militates against the idea propounded by many popular history books that in the framework of his cultural and educational policies Charlemagne more or less commissioned the devising of the minuscule with a view to creating a uniform, readily legible script.

Tino Licht sees his find as posing new questions for researchers. Was the Caroline minuscule adopted directly from Corbie by the court of the Frankish king? Or is it impossible that the royal court and Corbie were two separate entities? In other words, was Corbie itself perhaps the scriptorium of Charlemagne’s palace school? “Answering these questions will open up new insights into the cultural history of the era,” says the Heidelberg researcher.

Note for newsdesks
Digital picture material is available from the press office.