Press Release No. 242/2012
26 October 2012
Cooperation with the Vatican: Virtual reconstruction of the once most famous library north of the Alps 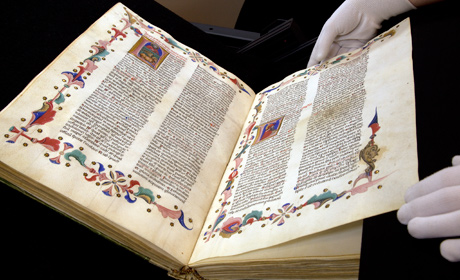 Digitisation of a Palatina manuscript in Rome

One of the most valuable collections of manuscripts from the Middle Ages and Early Modern Age – the Bibliotheca Palatina – will be virtually reunited. With the completion of the German-language manuscripts in its own holdings, Heidelberg University Library is now digitising the Latin codices of the former Library of the Palatinate, which have been housed within the walls of the Vatican Library, the Biblioteca Apostolica Vaticana, in Rome for nearly 400 years. With this step, the Vatican and Heidelberg University together with its library embarked on a cooperation that will extend over several years. This landmark project in scholarly research is being funded largely by the Manfred Lautenschläger Foundation. Representatives from the participating institutions, including the Prefect of the Vatican Library, and the project’s sponsor introduced the work to the public this Friday (26 October 2012).

The origins of the Bibliotheca Palatina date back to the year 1386, when Heidelberg University was founded. Because over time it came to hold the collections of both the university and the Palatinate, the Bibliotheca Palatina represented virtually all knowledge from the Middle Ages and Early Modern Age. At its height at the beginning of the 17th century, the library was considered the “optimus Germaniae literatae thesaurus“, the greatest treasure of all Germany’s learned. It met a premature end when Heidelberg was conquered by Catholic troops during the Thirty Years’ War. Pope Gregory XV demanded the entire library, the intellectual armoury of the Protestants, as the spoils of war. After a six-month journey, 3,700 mediaeval manuscripts and 13,000 printed volumes arrived at the Biblioteca Vaticana in August 1623. It was not until 1816 – through agreements reached during the Congress of Vienna – that at least the 847 German-language manuscripts were returned to their former home. Except for a few Greek and Latin codices, all the remaining non-German manuscripts and printed volumes still lie within the vaults of the Vatican Library in Rome.

“Thanks to the generous financial support of Dr. h.c. Manfred Lautenschläger and his foundation, we have been able to lay the necessary groundwork that affords researchers and the interested public alike a view into the digitised library while the priceless originals remain safely within their climatised vaults in conditions ideal for their conservation”, said Prof. Dr. Bernhard Eitel, Rector of Heidelberg University. He also expressed his gratitude to the Prefect of the Biblioteca Apostolica Vaticana, Monsignore Cesare Pasini, for the Vatican Library’s willingness to make the Latin manuscripts available through digitisation. The Director of Heidelberg University Library, Dr. Veit Probst, and the Director of Printed Books Department of the Vatican Library, Dr. Adalbert Roth, discussed the evolution and the realisation of the digitisation project.

In 2001 the Heidelberg University Library had already begun using modern digital technologies to make the initial volumes of the outstanding collection available on the Internet. Since then the library has been working on the virtual reconstruction of this unique treasury of books within multiple projects to digitise portions of the collection. A “field office” of the Heidelberg Digitisation Department was already set up inside the Vatican Library in November 2010. The initial goal was to digitise the 133 mediaeval manuscripts of the Bibliotheca Palatina that Elector Palatine Otto Henry had once brought to Heidelberg from the monastery at Lorsch. Since January 2012 Heidelberg University Library has been working on digitising the remaining 1,900 Latin codices in a long-term endeavour.

Depending on their size and scope, between four and seven manuscripts make their way each week from the Vatican vaults to the climatised and darkened Heidelberg digitisation studio, where they are photographed with a high-resolution camera. A special camera table allows these fragile objects to be digitised directly without touching them. Heidelberg University Library even developed a software programme to keep the work well-organised and seamless. The “DWork – Heidelberg Digitisation Workflow” programme allows all the individual steps to proceed automatically, from creating the metadata and generating the Internet presentation to long-term archiving. Professional image postprocessing programmes ensure that the digital facsimiles correspond as closely as possible to the originals.

For more information on the “Bibliotheca Palatina – digital“ project, go to http://palatina-digital.uni-hd.de.

Note to news desks:
Digital pictures an be downloaded from the web page
http://digi.ub.uni-heidelberg.de/de/bpd/presse/bildmaterial.html.