In Quest of the Cosmic Origins of Silver 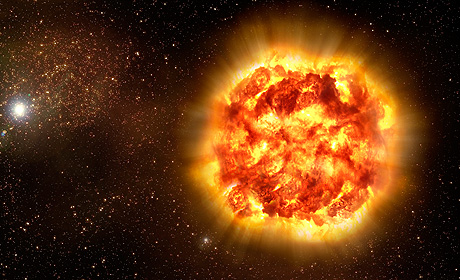 At the end of their lives, stars with ten times the mass of our sun explode as so-called supernovae. In the process, elements like silver are either hurled out into the universe or produced in the first place. The illustration is an artist’s impression of the first moments of such an explosion before the star is completely torn apart.

In the quest for the cosmic origins of heavy elements, Heidelberg scientist Dr. Camilla Hansen has established that silver can only have materialised during the explosion of clearly defined types of star. These are different from the kind of stars producing gold when they explode. The evidence for this comes from the measurement of various high-mass stars with the help of which the stepwise evolution of the components of all matter can be reconstructed. The findings from the investigations conducted by Dr. Hansen of Heidelberg University’s Centre for Astronomy (ZAH) in conjunction with other scientists in Germany and fellow astronomers in Japan and Sweden have been published in the journal „Astronomy & Astrophysics”.

The lightweight elements hydrogen, helium and traces of lithium came into being a few minutes after the Big Bang. All heavier elements materialised later in the interior of stars or during star explosions, with each generation of stars contributing a little to enriching the universe with chemical elements. The elements a star can generate in its lifetime depend largely on its mass. At the end of their lives, stars about ten times the size of our sun explode as so-called supernovae, producing elements sometimes heavier than iron that are released by the explosion. Depending on how heavy the star originally was, silver and gold can also materialise in this way.

When various stars of the same mass explode, the ratio of elements generated and hurled out into the universe is identical. This constant relation is perpetuated in the subsequent generations of stars forming from the remnants of their predecessors. The investigations by Dr. Hansen and her associated scientists have now demonstrated that the amount of silver in the stars measured is completely independent of the amounts of other heavy elements like gold. These observations indicate clearly for the first time that during a supernova silver takes shape in an entirely different fusion process from that in which gold forms. Accordingly, the scientists contend that silver cannot have originated together with gold. The elements must have materialised from stars of different masses.

“This is the first incontrovertible evidence for a special fusion process taking place during the explosion of a star,” says Dr. Hansen. “Up to now this had been mere speculation. After this discovery, we must now use simulations of these processes in supernova explosions to investigate more precisely when the conditions for the formation of silver are present. That way we can find out how heavy the stars were that could produce silver during their dramatic demise.”