On the left, a normal mouse-ear cress (Arabidopsis) plant, and on the right a plant in which ta-siRNA formation is compromised. The leaf structure of the plant is abnormal.

Throughout their life, plants form leaves and side roots. These two types of organs have something in common: their development is finely tuned by small regulatory RNA molecules, the trans-acting short interfering RNAs
(ta-siRNAs). Scientists Dr. Alexis Maizel and Virginie Jouannet at Heidelberg University‘s Centre for Organismal Studies were able to demonstrate how and where within the plant cell these ta-siRNAs are produced. They succeeded in identifying hotspots for the biogenesis of these special RNA molecules. The results of this study have been published in the “EMBO Journal”. 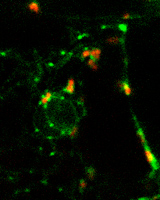 Microscopic image of plant cells. AGO7 (in green) concentrates in foci that are connected to a network of membranes (in red). These membranes are needed for the transport and secretion of proteins.

The formation of plant organs depends on the presence of proteins that allow cells to divide and take on new shapes and characteristics. The most straightforward route to protein production begins when genes are activated and transcribed into messenger RNAs that are then translated into proteins. However, cells often fine-tune their population of proteins by producing short interfering RNAs (siRNAs): small regulatory molecules that dock onto messenger RNA and cause them to be broken down before they can be used for protein production. Researchers already knew that ta-siRNAs, a type of siRNA, fine-tune the formation of leaves and the growth of side roots by blocking the production of specific proteins. What remained unknown, however, was exactly where in the plant cell the ta-siRNAs were produced.

Ta-siRNAs are created from longer RNA molecules that are whittled down by a complex of other molecules. One essential component of this cutting machine is a protein called AGO7. The Heidelberg scientists have uncovered that AGO7 accumulates in foci, called siRNA bodies, located in the cytoplasm of the cells. SiRNA bodies also contain all the other enzymes needed for the formation of ta-siRNAs. “These foci are therefore hotspots for the formation of the siRNAs, that is the small, regulatory RNA molecules”, explains Virginie Jouannet, a PhD student in Dr. Maizel’s group. In addition, the researchers were able to show that AGO7 could not longer fulfil its functions when released from the siRNA bodies, resulting in problems in the development of the plant. 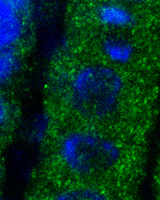 Microscopic image of plant cells. AGO7 (in green) concentrates in foci in the cytoplasm, whereas DNA (in blue) is in the nucleus.

Two other observations caught the attention of the researchers. For one thing, the siRNA bodies are closely linked to the network of membranes that the cell uses to transport and secrete proteins. “Interestingly, these foci also host viruses and plants defend themselves against viruses using siRNAs”, says Dr. Maizel. “These results reveal a hitherto unknown role for membranes in the biogenesis of RNA and suggest that the generation of siRNA can occur only in specific locations of the cell.”

Dr. Maizel leads an independent research group at the Centre for Organismal Studies at Heidelberg University and is a member of the university’s CellNetworks Cluster of Excellence. Collaborating on the research project were scientists from the Institut des Sciences du Végétal at the Centre National de la Recherche Scientifique (CNRS) in Gif-sur-Yvette as well as the Institut Jean-Pierre Bourgin at the Institut National de la Recherche Agronomique (INRA) in Versailles (France).