A local boat meets the RV vessel „Sonne“ for the exchange of water and air samples.

Coastal waters of the tropical Western Pacific produce natural halogenated organic molecules involving chlorine, bromine and iodine atoms that may damage the stratospheric ozone layer. This is the conclusion drawn from the initial findings of a field measurement campaign conducted in the South China Sea in the framework of the international SHIVA project. In November and December 2011, the scientists involved in this interdisciplinary project, which is coordinated by physicists from the Institute of Environmental Physics at Heidelberg University, investigated the oceanic sources and atmospheric transport pathways of these trace gases in the waters and air of Malaysia, Brunei and the Philippines. 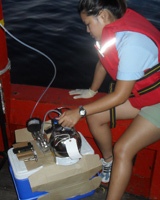 Air tight sea water samples are taken by a student aboard a small vessel off coast Borneo for the analysis of halogenated organic molecules.

The halogens chlorine, bromine and iodine are known as ozone-depleting substances. Micro-organisms such as macro-algae and phytoplankton form natural halogenated organic molecules, which are released into the air, where they eventually find their way into the stratosphere. The SHIVA project is testing conjectures based on earlier findings by scientists from Heidelberg University’s Institute of Environmental Physics that the ozone layer may not only be harmed by industrial “ozone killers” like chlorofluorocarbons (CFC), but also by these natural halogenated organic molecules. “Our measurements off the coast of Borneo, in the South China Sea and in the Sulu Sea indicate that the biologically productive coastal waters are particularly abundant sources of these trace gases”, says overall coordinator Prof. Dr. Klaus Pfeilsticker of Heidelberg University. Involved in the field measurements were the German research ship “Sonne” and various smaller Malaysian vessels. “In addition, our British and Malaysian colleagues did laboratory analyses which indicate that rhodophyta, or red algae, are one of the prime producers of these halogenated organic molecules, due to a stress reaction triggered by oxygen”, Prof. Pfeilsticker adds.

The German Aerospace Center’s (Deutsches Zentrum für Luft- und Raumfahrt, DLR) research plane “Falcon” based in Miri (Borneo) was used to investigate the atmospheric transport pathways of the halogenated organic molecules and their decay products more closely. In the tropics, atmospheric transport of the targeted species to the mid troposphere is fairly rapid due to the shallow atmospheric boundary layer. In addition, in the rainy season convective systems like thunderstorms lift the air masses into the upper troposphere in a matter of hours. “The results from our measurements and models indicate that for the transport of ozone relevant and other trace gases into the upper tropical troposphere, the vertical transport due to intermittent convective systems is the most important factor”, says Prof. Pfeilsticker. “From there these gases are transported to the lower stratosphere by radiative heating in the tropical tropopause layer.”

Next, the scientists will evaluate and interpret the new data with the help of large-scale chemical, transport and global-climate models. “Our aim is to predict the future development of the ozone layer under the influence of anthropogenic climate change in the tropical oceans, atmospheric circulation and photochemistry”, says Prof. Pfeilsticker. In the coming years, the transport pathways of the halogenated organic molecules in the tropical tropopause region are to be investigated with high-flying planes like the NASA’s “Global Hawk”.

SHIVA is funded by resources totalling EUR 10 million from the European Union and various national institutions. The project involves 130 scientists from 18 research units in Asia and Europe. Alongside Heidelberg University’s Institute of Environmental Physics as project coordinator, the other German institutions involved are the DLR, the Helmholtz Centre for Ocean Research Kiel (GEOMAR), the Alfred Wegener Institute for Polar and Marine Research, Bremen University and Frankfurt University. Also taking part in the project are three British universities, three research institutions in France, Belgium and Norway and six research units in Malaysia and the Philippines. SHIVA stands for Stratospheric Ozone: Halogen Impact in a Varying Atmosphere. For more information, go to http://shiva.iup.uni-heidelberg.de.

Note for newsdesks:
Digital picture material is available from the Press Office.